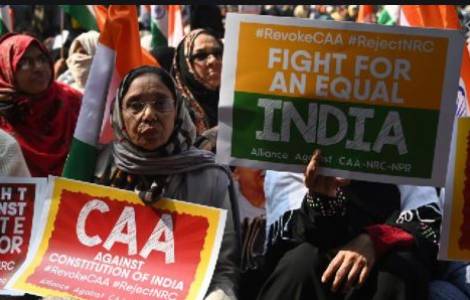 Delhi (Agenzia Fides) - It is urgent to support the fundamental rights contained in the Indian Constitution in a critical phase for the democratic life of the nation, in which human rights and freedoms of expression of conscience and religion are violated: this is what many organizations of the civil society, associations for the defense of human rights, forums of churches and religious communities, one day after the 72nd Republic Day, which the nation celebrated yesterday, January 26.
On the same day in 1950 the Constitution entered into force, it was a turning point in the history of India when laws were passed that guarantee fundamental rights and civil liberties. Then President Rajendra Prasad, India's first President, said in his 1950 Republic Day speech: "Our Constitution is a democratic instrument that seeks to guarantee individual citizens the freedom that is so priceless. India has never banned or persecuted opinions or beliefs and our national philosophy leaves room for devotees of a personal God as well as an agnostic or atheist. Therefore, we will implement in practice, on the basis of our Constitution, what we have inherited from our traditions, namely freedom of opinion and expression".
"This year's Republic Day was celebrated under the shadow of serious human rights violations, which undermine the democratic guarantees provided by the Indian Constitution. The growing dissent of civil society groups against discriminatory and unconstitutional laws and government policies is increasingly meeting a harsh response from the State. Human rights defenders, lawyers, journalists, writers, poets and students who condemn the government's actions or inaction to uphold the principles of the Constitution are labeled as 'anti-national' and arbitrary police arrests and judicial proceedings based on fabricated evidence have led to international condemnation", says a network of Indian and international organizations in a note sent to Fides. Among those arrested there is also Fr. Stan Swamy, an 83-year-old Jesuit, who has always defended, throughout his life, the rights of tha Adivasis and Dalits, today accused of sedition and terrorism.
The Christian-inspired organization "Christian Solidarity Worldwide" points outs in a message sent to Fides: "Following the introduction of the controversial Citizenship Amendment Act (CAA) in 2019, which violates articles 14 and 15 of the Constitution which protect the right to equality and the right not to be discriminated against on the grounds of religion, respectively, Muslims in India continue to face increasing discrimination on the grounds of their faith". CSW recalls an emblematic episode: in October 2020, the houses belonging to sixty-four Muslim families in the village of Bharasingri, Sonitpur district, Assam, were demolished, with the result that more than 500 people were left homeless. Local media reported that the Bharatiya Janata Party (BJP) campaigned accusing Muslims of being 'illegal immigrants from Bangladesh' before the demolition".
"Article 25 of the Constitution protects the right to freedom of religion or belief in which all people have an equal right to freedom of conscience and the right to freely profess, practice and spread religion", it is stated. "However, Christians are the victims of targeted attacks on their faith across the country and particularly in rural areas of India, where they may face permanent ostracism that affect their livelihoods. The rhetoric of the nationalist parties that have a majority in the country, such as the BJP, or Hindu extremist organizations such as RSS is the central source of incitement to hatred and intolerance towards religious minorities, and has fueled community tensions, creating concerns even among UN mandate holders" , denounces the civil society network.
John Dayal, a Catholic activist and Indian writer for civil rights, explains to Fides: "I do not know what is more disturbing: the terrible situation in India regarding the standard of respect for human rights and freedom of religion and belief, or the aggressive denial of the government. The current federal government and many of the regional administrations arrest writers, intellectuals, journalists and activists, thanks to first instance courts that deny them bail. Muslims are the main object of hatred and violence, while Christian priests continue to be harassed, attacked, marginalized and detained on futile charges. Yesterday's Republic Day was marked by mass protests in the face of the overwhelming power of the State.
In 2020, it was women who led the protest, this year it was the peasant community that challenged three laws that have a serious impact on agriculture".
NGOs and religious groups say they are "deeply concerned about the erosion of the fundamental rights and freedoms enshrined in the Constitution", and urge the Indian government "to defend the sacred principles contained in this document which binds its citizens to the search for justice, of freedom, equality and fraternity, and to ensure that the country does not stray from the vision on which India was built". (PA) (Agenzia Fides, 27/1/2021)