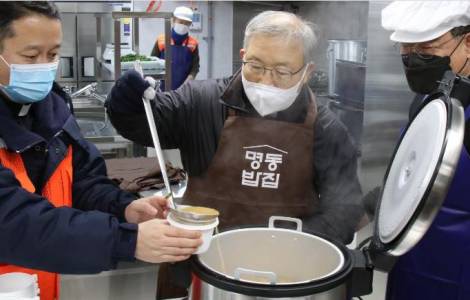 2022-05-05
Archdiocese of Seoul sends priests to the mission

2021-07-01
Cardinal Yeom: we pray for true reconciliation, unity and peace on the Korean peninsula

2021-02-09
Twenty new priests in Seoul, open to the challenges of the mission

Seoul (Agenzia Fides) - It is "a little leaven that transforms the Church and the world, making it a place of love". This is how Father Francis Jeong-hwan Kim, director of the "One Body One Spirit movement" presents to Agenzia Fides the canteen service for the poor activated within the Archdiocese of Seoul, in the square in front of Myeongdong Cathedral. "When Pope Francis came to visit Myeongdong Cathedral in 2014, he blessed and exhorted us to be light, salt and leaven, according to Jesus' invitation made by Jesus in the Gospel. I hope that this service from the 'Myeongdong Babjib' canteen is a little leaven", he says, noting the full involvement of the faithful of the archdiocese, of the volunteers of parishes and ecclesial movements, of the members of the diocesan Caritas, of the clergy and religious.
The service offers the poor and homeless 1400 pack-lunches per week, distributed on Wednesdays, Fridays and Sundays. The canteen, called 'Myeongdong Babjib' was launched on January 6, and is the result of a fruitful partnership between the archdiocese of Seoul and the large Korean company SK Group, which works in the field of energy and chemistry, involved as a sponsor of the initiative .
Cardinal Andrew Yeom, promoter of the initiative and often personally involved in the distribution of food, says: "Ours is a way of responding to Pope Francis' message for the 4th Day of the Poor, entitled 'Reach out to the poor. It is a call, addressed to all of us to commit ourselves to the care of the poor, considering them an integral part of the one family that is our community. This canteen is the right place to reach and show a gesture of love towards those who live in the physical or existential peripheries of our cities. It is also a way of sharing our resources so that no one feels abandoned or marginalized".
The charitable initiative of the archdiocese, welcomed with enthusiasm and zeal by many faithful, who feel called to participate and to be co-responsible, constitutes the first phase of a project which foresees, after the creation of a canteen, the institution of a refuge and a reception center where the homeless can wash themselves, wash their clothes, find refuge and hospitality. The long-term plan also provides for sharing a professional training course, helping them to find a job so that they can reintegrate into the social fabric.
In a note from the Communications Office of the Archdiocese of Soul, Fr. Matthias Young-yup Hur, spokesman for the Archdiocese remarked: "The long-term goal of the project is to provide people who are lonely, marginalized or expelled from the world of work, the opportunity to become active agents of their lives and to fully reintegrate into society. Myeongdong Babjib could be the start of an integrated health system of care for the poorest people, for the homeless, promoting their personal development and improvement of their lives. Cardinal Yeom - recalls the spokesman - has a particular pastoral interest in the project, given his previous experience in setting up a soup kitchen for the poor, when he was parish priest, a work that has continued successfully for over 30 years and which has brought benefit for thousands of people". (PA) (Agenzia Fides, 26/1/2021) 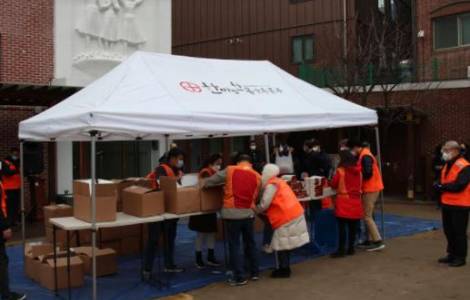 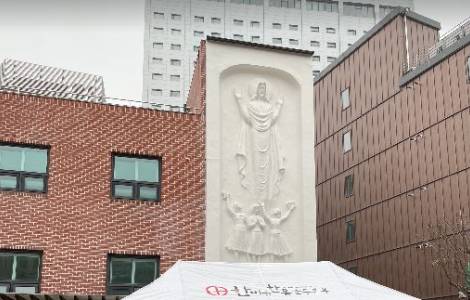 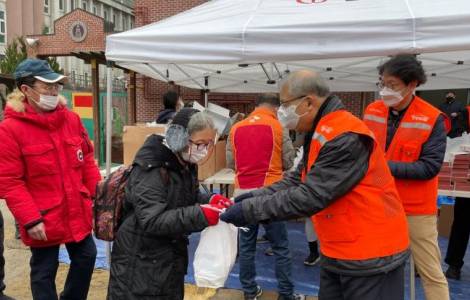