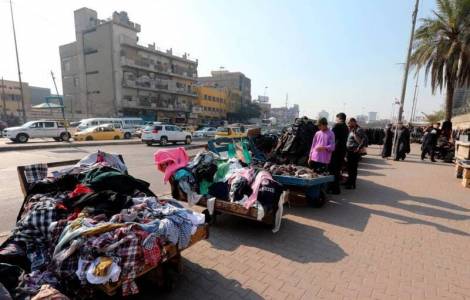 2021-02-17
Chaldean Patriarch Sako: it is wrong to expect that the Pope's visit will solve all our problems

2021-02-05
The Chaldean Patriarch Sako: our priests are good, criticism without charity is bad for the Church

Baghdad (Agenzia Fides) - "They wanted to send a message of death, which perhaps has to do with the withdrawal of US soldiers from the Country, or with the electoral project. The fact remains that, so far, there is no declaration or claim from who is behind these explosions". The statements and hypotheses that Chaldean Patriarch Louis Raphael Sako made to Agenzia Fides regarding the double attack that this morning, January 21, claimed about thirty victims and 90 injured among the many people who crowded the second-hand clothes market in Tayaran Square (photo), in central Baghdad. At the moment, the Iraqi authorities have declared that there have still been no claims of the attack, perpetrated by two suicide bombers. General Kazem Selman, director of Iraqi Civil Protection, said that "the attack is reminiscent in terms and execution of those carried out by Daesh (Islamic State, ed)".
It was since June 2019 that central Baghdad had not been hit by such attacks. The jihadists of the self-styled Islamic State, who had conquered Mosul and then large regions of Northern Iraq starting from June 2014, were declared militarily defeated in Iraq in December 2017.
The Baghdad massacre also casts a shadow of concern over the anxious expectation experienced by local Christian communities in view of Pope Francis’s apostolic visit to Iraq, scheduled for March 5 to 8. On January 19, in Baghdad, at the headquarters of the Chaldean Patriarchate, the Catholic bishops in Iraq had participated in a meeting in preparation for the announced papal visit. Cardinal Louis Raphael Sako, in view of the upcoming "Fast of Nineveh" - three days of fasting and prayer traditionally observed by Chaldean Christians to commemorate the conversion of Nineveh following the preaching of the Prophet Jonah, days that this year fall on the 25th to January 27 - exhorted all the Chaldean baptized to "pray for salvation from the Coronavirus epidemic" and "also for the success of Pope Francis' visit in March". Meanwhile, Cardinal Pietro Parolin, Vatican Secretary of State, on behalf of Pope Francis sent a telegram of condolence to Iraqi President Bahram Salih for the victims of the massacre. "His Holiness Pope Francis" reads the telegram, released by the Vatican Press Office " was deeply saddened to learn of the bomb attacks on Tayaran Square in Baghdad this morning. In deploring this senseless act of brutality", the text continues, the Pope "prays for the deceased victims and their families, for the injured and for the emergency personnel in attendance. Trusting that all will continue work to overcome violence with fraternity, solidarity and peace, Pope Francis - concludes Cardinal Parolin - invokes upon the nation and its people the blessing of the Most High". (GV) (Agenzia Fides, 21/1/2021)