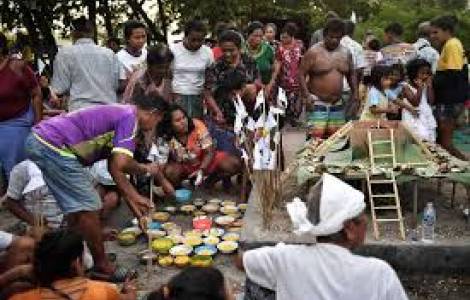 Chiangmai (Agenzia Fides) - Until before Christmas, the Covid-19 pandemic in Thailand was well under control compared to the rest of the world. "Since the beginning of the pandemic, no more than 4,000 people have been infected with the virus, with a total of fewer than 60 deaths", confirms Fr. Ferdinando Pistore, who lives and works as a Fidei Donum missionary in the Lamphun community. "Unfortunately, just before Christmas, a source of infection was found at the fish market in Samut Sakhon Province south of Bangkok, which to date, January 21, has registered more than 12,000 cases, tripling the number of infections compared to before Christmas. Some provinces, most schools and some shops were immediately closed. A significant part of the population works without a fixed salary and during this period the complete absence of foreign tourists has caused serious daily economic problems", said Fr. Ferdinando with concern.
The priest himself came to Bangkok just before Christmas, after living as a guest in the Lamphun community for two years, to take part in Thai language courses. Like the Chaehom congregation, Lamphun is cared for by Fidei Donum missionaries from northern Italy. They are the only two churches in Asia that are not looked after by a religious community.
"Our mission is made possible through the collaboration with the Northern Italian Church. Thanks to this partnership, the boundaries of the individual dioceses are overcome by participating in joint projects", explains Fr. Pistore. "Currently two of us are active in Lamphun, I am from the Diocese of Vicenza and the other is from the Diocese of Belluno, while two other missionaries, both from the Diocese of Padua, are working in the Chaehom parish in the Province of Lampang. The diocese in which we serve is the Diocese of Chiangmai in northern Thailand, to which four provinces belong. One of them is Lamphun with a huge area of 4,506 km². The parish did not exist until 10 years ago, before that there was no church or Catholic priests in the entire province. It was founded in 2011 and is a point of reference for the few Catholics, a very small minority, in this province, which is traditionally rooted in Theravada Buddhism. In addition, there is the care of a Catholic community of Burmese immigrants who came to Lamphun for work reasons: many of them have difficulty communicating because they do not speak the Thai language. The highest point of the province (1,200 m) is the village of Papae, inhabited by the Karen people, about 65 km from the parish church of St. Francis in Lamphun. Here in Papae a small Catholic community has formed. The chapel of St. Clare was built and attempts are made to regularly celebrate Sunday mass up there, with the help of some nuns who belong to the same ethnic group and who work with us here in the community. In addition, there are various social projects in cooperation and with the support of almost exclusively Buddhist social workers and volunteers who accompany us in some villages, report emergency situations and act as mediators for contacts and tribal languages".
In conclusion, however, the missionary also stressed that because of the pandemic, "even in the country known as the "Land of Smiles", worries and stress about the current situation and the future are increasing". (FP/AP) (Agenzia Fides, 21/1/2021)

AMERICA/ECUADOR - Bishops to the authorities: the most vulnerable people must receive the vaccine first