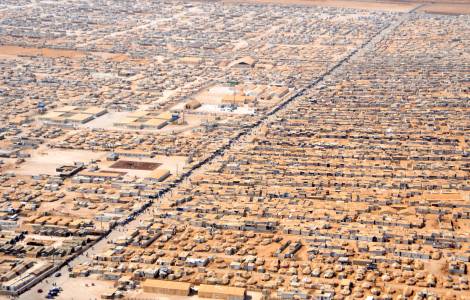 Amman (Agenzia Fides) - The Vicar of the Latin Patriarchate in Jerusalem appreciates the decision of the Jordanian government to consider refugees from Iraq and Syria as part of the Covid 19 vaccination campaign.
"This was welcomed by everyone, including Jordanian citizens, because it confirms that Jordan refugees are recognized and treated as people with equal rights". This was underlined, in a conversation with Agenzia Fides, by Bishop William Hanna Shomali. "The government's decision", adds the Palestinian bishop from Beit Sahour, "has several reasons: Refugees are poor, they have no means to pay for the vaccine themselves. Jordan receives international aid, albeit insufficient, to maintain the reception camps on its territory, and therefore the free expansion of vaccine administration to refugees also fulfills elementary criteria of justice. Jordan is responsible for the fate of refugees, and bears this responsibility. Then, of course, extending the vaccination campaign to refugees right from the start represents a health protection for the rest of the inhabitants in the country. In short, the government's decision is due to various reasons, but the main reason remains humanitarian: the refugees present on the national territory are people, and their lives must be protected like that of Jordanian citizens". Jordan's decision was also honored by the United Nations Refugee Agency (UNHCR), the reception center for refugees in Jordan, where hundreds of thousands of Iraqi and Syrian refugees have lived for years. The national vaccination plan drawn up by the Amman Ministry of Health stipulates that officially registered refugees (more than 700,000 in a country of 10 million people) can receive the vaccine according to the same priority criteria that have been set for Jordanian citizens, that is, reserving the priority to categories at risk (elderly and people with chronic diseases). Jordan has so far ordered 2 million doses of the vaccine: the first doses were the vaccine from the Chinese company Sinopharm, but local authorities have already given the go-ahead for the Biontech/Pfizer vaccine, of which the first doses have already been delivered. So far, over 316,000 infections have been registered in Jordan, which have already caused almost 4,200 deaths. Syrian refugees are closed in tents and containers, without being able to leave the reception camps - like the huge one in Zaatari (see photo), where there are more than 70 thousand Syrian refugees - refugees are also more exposed to the psychological consequences of the pandemic. According to data provided by UNHCR, there are currently about 2,000 cases of Covid-19 infections registered among Syrian and Iraqi refugees in Jordan. (GV) (Agenzia Fides, 20/1/2021)