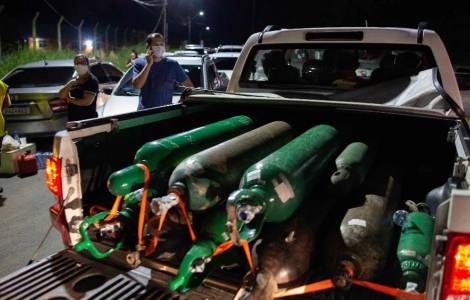 2021-02-19
REPAM: alarming increase in the number of infections and deaths due to Covid-19 in the pan-Amazon region

2021-02-01
February 2, feast of the Presentation of Our Lord and National Day of Prayer in the dark night of Covid-19

2021-01-26
Prison pastoral care: reports of violence doubled, in addition to the spread of Covid-19

Manaus (Agenzia Fides) - In view of the second wave of the Covid-19 pandemic, which also affects the Brazilian state of Amazonas and in particular Manaus, the Norte 1 region of the Brazilian Bishops' Conference (CNBB), which includes the north of the state of Amazonas and Roraima, has launched a fundraising campaign, which aims to help Covid-19 victims in the Amazon and Rorima, for whom adequate care is often not guaranteed in hospitals. "As a Catholic Church, we call on the authorities to make every effort to prevent the greatest possible number of deaths among the population of the Amazon", said the bishops. "We hope that the poorest are not excluded from care and that solidarity and care will be taken over by everyone".
The Archbishop of Manaus, Mgr. Leonardo Steiner, launched an appeal through a video released on social networks: "In the first wave, many people in the Amazon and Roraima died due to lack of information, lack of beds in hospitals, lack of beds in the intensive care unit - ICU. Today, in the second wave, people are dying of a shortage of hospital beds, a shortage of beds in the intensive care unit and a shortage of oxygen equipment. We Bishops of Amazonas and Roraima make an appeal: for God's sake, send us oxygen, give us oxygen. People can no longer die from lack of oxygen, from lack of beds in intensive care". According to the Fundação de Vigilância em Saúde do Estado do Amazonas, the number of infections rose from January 1 to 14 to 21,786 people with an average of 1,556 daily cases and 635 deaths, an average of 45 deaths per day, the vast majority in Manaus. The number of burials in the cemeteries of Manaus, where 198 people were buried on January 13, suggests that the number of of Covid-19 victims is greater than official figures. The Bishops of the Norte 1 Region note that the relaxation of distancing measures and the lack of personal care, especially the use of masks and disinfectants, have been a constant in recent months. "At the same time, we are outraged by the situation we are now experiencing after the reports of scientists and epidemiologists who had been announcing the arrival of a second wave for several months were not heard and adequate health measures were not taken". (SL) (Agenzia Fides, 18/1/2021)

AMERICA/ECUADOR - Bishops to the authorities: the most vulnerable people must receive the vaccine first