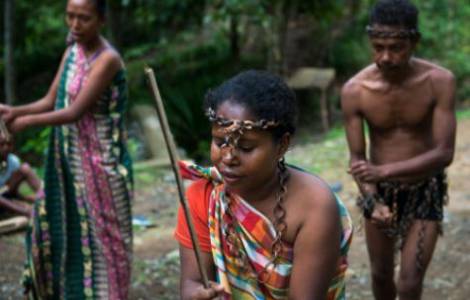 Capiz (Agenzia Fides) - "An in-depth investigation by an independent body aimed at explaining what really happened on December 30, 2020; the cessation of military intervention on indigenous communities so that our Tumandok brothers and sisters, can return to their homes and live in peace again; conscientious respect for ethical standards related to the rules of engagement by the police and the army in the context of their operations, bringing cameras in all operations to protect themselves from false accusations and and protect civilians from the excessive use of violence or abuse of power": this is what the Bishops of the western Visayas islands in the center of the Philippine archipelago demand - in a Pastoral Letter, sent to Agenzia Fides, which explicitly refers to the "difficult situation of our brothers and Sisters Tumandoks" and to the massacre of indigenous people at the end of 2020 (see FIdes, 16/1/2021). The letter - which bears the signature of 8 Bishops, including: Cardinal Jose Advincula, Archbishop of Capiz; Msgr. Jose Corazon Tala-oc, Bishop of Kalibo; by Msgr. Narciso Abellana, Bishop of Romblon; Msgr. Jose Lazo, Archbishop of Jaro, and other bishops of the metropolitan region of Jaro, - will be read at all Masses in all Churches of Western Visayas on January 24, 2021.
The Bishops ask all "to be very vigilant in the defense of the sacredness of life and in respect for the protection of the rights of all", urging "to discern and pray for the will of God in the midst of all the killings and violations of human rights and to act under the guidance guided of the principles of non-violent action". The bishops launch a heartfelt appeal to "stop the killings, respect the rights of people, live in peace, stop the militarization of indigenous communities". "We, bishops of Western Visayas share the pains and anxieties of our brothers and sisters of the Tumandok tribe. We suffer with the families of the nine Tumandok tribes who mourn the dead. We share the suffering of those arrested and their families. We empathize with the fear and insecurity of those who have been displaced by violence. And we condemn all the killings and in particular the killings of our Tumandok brothers". The text continues: "The voices of these 27,000 victims of the senseless war against illegal drugs cry out to God for justice. Recently, from the island of Negros, many people have been labeled as members or supporters of the Communist Party of the Philippines - New People's Army (CPP-NPA). Now, as we see on the island of Panay, a Bishop said the killings are a continuation of the mass killings and arrests of other activists in the central Philippines in recent months". The Pastral Letter recalls that on 30 December 2020, a joint operation by the Philippine Army and the Philippine National Police, with 28 search warrants, resulted in the deaths of nine people and the arrest of 17 members and leaders of the Tumandok tribes of Tapaz, Capiz and Calinog, Iloilo (see Fides, 16/1/2021). Among those killed and arrested were former or current leaders of the Tumandok group in question. The Tumandoks, an alliance of 17 communities of indigenous peoples of Capiz and Iloilo, strongly oppose the construction of the Jalaur mega dam. Indigenous leaders and human rights organizations believe that, due to their strong opposition to the project, they have become victims of military operations and are accused as members or supporters of the communist guerrillas. In the December 30 massacre, while the police claim that the indigenous "fought, that's why they were killed", the families replied that the victims did not resist the arrest and that "they were murdered". "The atrocities committed - write the Bishops of the Visayas - have created a climate of fear and uncertainty among the residents of the Tumandok communities. Fear has forced many of them to leave their communities and migrate to safer places". The voice of the Bishops, raised in defense of the indigenous peoples, relies on the intercession of the Virgin Mary, Nuestra Senora de la Candelaria, patroness of the Western Visayas, to restore peace and justice in the central Philippines. (PA) (Agenzia Fides, 18/1/2021)