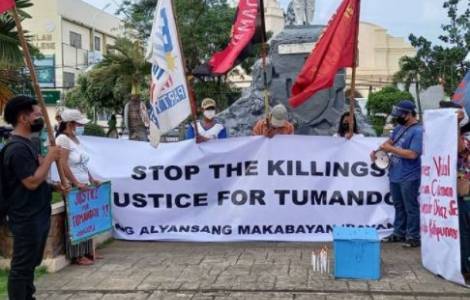 Manila (Agenzia Fides) - Filipino civil society, together with church organizations, is calling for careful investigations into the massacre that took place in Tapaz in the province of Capiz, on the island of Panay, in the center of the vast archipelago, two days before the end of the year. On December 30, a military offensive against the local indigenous Tumandok community began, in which nine people died and about twenty were arrested. At the moment, the reasons for the massacre and who were responsible are not yet known, and the internal investigations initiated by the military authorities are considered insufficient. According to the victims' families, the nine unarmed civilians were tortured before they died. Police officers who escorted the military operation claim that they were members of the New People's Army who opened fire on the agents, which the victims' families deny. The massacre is connected to the resistance and protests against the controversial project of the huge Jalaur dam, which aims to provide water for large-scale irrigation and produce electricity. The second phase of the project, which cost over 11 billion pesos (about 250 million dollars), began in 2019.
There were expressions of solidarity with the families concerned on the island, but also in Europe, where the organization of Filipinos living abroad, "Promotion of the Chruch People Response" (PCPR Europe), launched an initiative of solidarity with the Tumandok families in the past few days and drew attention to the incident, with investigations into the dynamics of the event and the initiation of "civil" legal proceedings. "The prerequisite for this would be", said the Camillian Father Aris Miranda to Fides, "to get to the scene of the crime, which was immediately cordoned off". The action in Panay is not the only episode of violence against indigenous peoples: "There is not only the problem of the dam", explains Father Miranda, "but land from indigenous peoples is repeatedly confiscated because Panay is rich in natural resources and arable land, which is why both Filipino and foreign investors have tried time and again to get hold of the land". The Tumandoks are a local people of about 95 thousand members who are very attached to their land and traditions and were among the first to oppose the Spanish conquest and still among the first to fight against the lobbies supported by the dictator Ferdinando Marcos.
Panay is in fact an island where large estates reign and is fertile soil for sugar cane. It has always been a place that whets great appetites but also has a long history of local resistance to external intruders". Shortly before the massacre in Capiz, Bishop Gerardo Alminaza of San Carlos, whose diocese, which includes part of this territory, recalled the recent episodes of violence on the island in his Christmas message, stressing that "peace is non-negotiable". "We urge our local government not to become a political hostage to these oppressive policies. Christmas must inspire and encourage us to promote a peaceful city, a peaceful island and a peaceful country free from senseless attacks", said the bishop. (MG-PA) (Agenzia Fides, 16/1/2021)

ASIA/MYANMAR - Buddhist monks intervene in negotiations with the army

AFRICA/DR CONGO - After the fatal attack on the Italian Ambassador: More civilians are victims of massacres