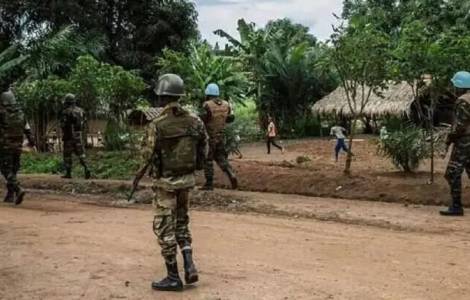 Bangui (Agenzia Fides) - The rebel offensive against the Central African capital Bangui has been repelled (see Fides, 13/1/2021). "The attack was repelled by the UN peacekeepers, together with the Central African armed forces", said the spokesman for the United Nations Mission in the Central African Republic (MINUSCA), who "deplores the loss of a Rwandan peacekeeper". The assault by the rebels of the Coalition des patriotes pour le changement (CPC) was carried out simultaneously 9 and 12 kilometers from the center of the capital, at dawn, against the units of the regular army. The attack was repulsed by the military with the help of MINUSCA Blue Helmets, reinforced by elements of the Rwandan special forces and perhaps Russian military advisers. In addition to the Rwandan soldier, the death toll is 30 rebels killed and 5 captured, according to sources from the government of Bangui. Insecurity in the country prevented three bishops from reaching the capital to participate in the Plenary Assembly of the Central African Bishops' Conference which is being held from January 9 to 18 because of the threat against the population of their respective Dioceses because of the presence of rebels. They are His Exc. Mgr. Juan-José Aguirre Muñoz, Bishop of Bangassou, Mgr. Mirosław Gucwa, Bishop of Bouar, and Mgr. Guerrino Perin, Bishop of Mbaiki. We recall that the city of Bangassou, in the south-east, fell under rebel control on Sunday 3 January (see Fides, 4/1/2021) while Bouar, in the west, suffered a violent assault on 9 January, repulsed by the army. During the attack hundreds of people took refuge in St. Laurent, St. Elie convents as well as in the Cathedral of Fatima (see Fides, 13/1/2021).
On 19 December 2020, eight days before the presidential and legislative elections on 27 December, a coalition of six of the most powerful armed groups (Coalition des patriotes pour le changement - CPC), which have occupied two-thirds of the Central African Republic since the start of the civil war, eight years ago, announced an offensive intended to prevent the re-election of outgoing President Fuastin Touadéra. The latter was proclaimed the winner in the first round on 4 January. Since then, the rebels have intensified their offensive against the country's main urban centers The violence has pushed more than 30,000 people to flee to neighboring countries, also causing tens of thousands of internally displaced people, according to the United Nations. (L.M.) (Agenzia Fides, 14/1/2021)

AFRICA/DR CONGO - After the fatal attack on the Italian Ambassador: More civilians are victims of massacres