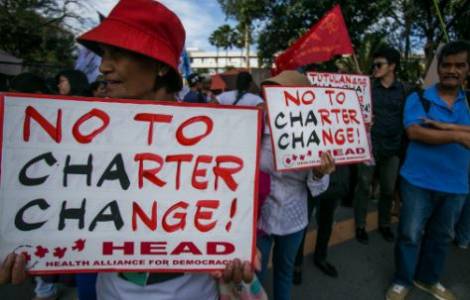 Manila (Agenzia Fides) - Several Bishops of the Philippines express strong reservations about the new initiatives to revise the 1987 Constitution during the Covid-19 pandemic. In the Philippine political panorama, in fact, representatives of the ruling party announced that the debate on the change to the Constitution will resume in the House of Representatives, justifying the move with the need to adapt some measures to deal with the pandemic. The House of Representatives Committee on Constitutional Amendments will officially reopen hearings on Wednesday, January 13, and some leaders of the political opposition have also spoken in favor of a revision of the Charter. Members of the ruling party argue that easing constitutional restrictions on the ownership of foreign individuals and companies in the Philippines would supposedly help offset the devastating effects of the pandemic on the Philippine economy. "Advocates for change are providing all kinds of reasons to change the Charter", said Bishop Broderick Pabillo, Apostolic Administrator of Manila. "First they gave economic reasons, then reasons related to the reform of party laws, now the coronavirus. This is very suspicious", he said. Starting a constitutional review process today could pave the way for an extension of the terms of the parliamentary mandate. "Right now, promoting change would mean avoiding elections", said Mgr. Pabillo.
The bishop emeritus of Novaliches, Mgr. Teodoro Bacani, has also expressed concern about the recent campaign to change the Charter with less than two years to go until the end of President Duterte's administration, defining as a 'pretext' the supposed need to address the coronavirus epidemic. The Bishop Emeritus of Sorsogon, Mgr. Arturo Bastes, then questioned the approach with which the conversations about the change of the Charter in Congress have been renewed: "There is no need to change the Constitution due to a pandemic, which has no real effect on our current Constitution. I oppose this renewed push to change the Charter", he said.
President Duterte has long expressed his desire to create a federal system of government. To discuss and expand the amendments to the Charter, the Congress could be transformed into a Constituent Assembly, according to one of the 3 ways to amend the Charter.
According to analysts, once a Constituent Assembly is opened, new political provisions could be introduced, at all levels: "It could be a great step towards quicksand", warned Professor Antonio La Viña, professor of constitutional law. This aspect generates the necessary prudence of the leaders of the Catholic Church regarding the possibility of reforming the Constitution.
Already in 2018, the Catholic Bishops' Conference of the Philippines (CBCP) had expressed serious concerns about Duterte administration's intention to revise the 1987 Constitution to move to a federal system. Between "widespread poverty, inequality and violence in our country", the statement affirms, "the modification of the fundamental law of the country, so carefully elaborated for the common good after years of dictatorship, requires participation and consultation of the people, unity of vision, transparency and relative serenity" . According to the Bishops, a possible constitutional revision should lead to "a stronger defense and promotion of moral values, human dignity and fundamental rights, integrity and truth, participation, solidarity and good common". (SD-PA) (Agenzia Fides, 13/1/2021)