AFRICA/NIGER - After the release of the Italian missionary: "Attacks on Christians continue" 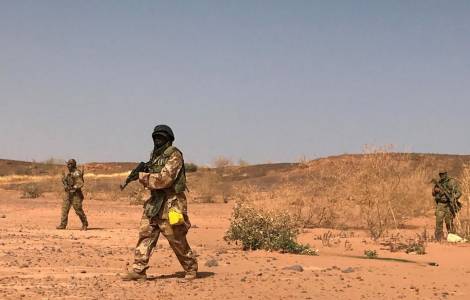 Niamey (Agenzia Fides) - "The feast for the liberation of Father Pierluigi Maccalli, last October, after two years of imprisonment in the desert, was short-lived", writes to Agenzia Fides Fr. Mauro Armanino, brother of Fr. Maccalli, missionary of the Society of African Missions (SMA) kidnapped by jihadist militiamen from his mission in Bomoanga on the border between Niger and Burkina Faso on the night of September 17-18, 2018 and released on October 8, 2020 (see Fides, 9/10/2020).
"According to local witnesses, last week at least five armed people on two motorcycles broke into the courtyard of the mission where Pierluigi and one of his confreres lived. After the sermon in the mosque of a village near Bomoanga, the intruders arrived in the evening and tried in vain to open the door of Pierluigi's room. They then took a few insignificant things with them: a mattress and some blankets from the guest room not far away", says Fr. Armanino.
"After a period of relative calm, this fact has made people, especially Christians, fearful again", the missionary denounced.
"The impunity that appears to protect the actions of these armed men and the apparent incompetence of the security forces have helped Christians to relive their daily lives in an atmosphere of fear". Father Armanino explains: "for some time now the men of the village of Bomoanga and probably also the inhabitants of the other villages, who are in a similar situation, have not slept in the village at night. They hide in the surrounding woods and then return home in the morning, to live with their wives, children and the rest of the family. The immediate consequence of the incident consists in the fact that the common prayers in the church, which they were hesitantly taken up again, are now suspended again".
"Basically, these are few things, if compared with the tragedy that hit the farmers on the border with Mali a few days ago. Over one hundred people, all of them Muslim, were killed and over ten thousand others fled their homes and fields in fear (see Fides, 11/1/2021)", said the missionary. "This is not comparable to the relatively minor violence in Bomoanga. But the recurring violence is also astonishing because it is the mother parish of the area, the new church that Pierluigi built with so much dedication and passion", says Fr. Armanino, who underlines how "hitting Bomoanga means wounding the heart and dignity of Christians, who are very numerous in the area".
"What is still happening here can be summed up in two words. One of them, the strongest, is persecution. That is, the direct impediment to exercising freedom of religion and the right to education of children, with the forced closure of schools. The second word, perhaps even worse, is the absence of the State that does not allow these rights to be respected. Unfortunately, the attacks on the parish of Bomoanga did not end with the release of Father Gigi", concludes the missionary. (L.M.) (Agenzia Fides, 12/1/2021)

AFRICA/DR CONGO - Italian ambassador killed in kidnapping attempt: "He was very close to the missionaries"

AFRICA/BURKINA FASO - The Bishops: "We need to tackle the issue of internally displaced people to avoid new tensions"