AFRICA/IVORY COAST - Catholic Church ends 125th anniversary: "We must move on to a new dynamic of faith" 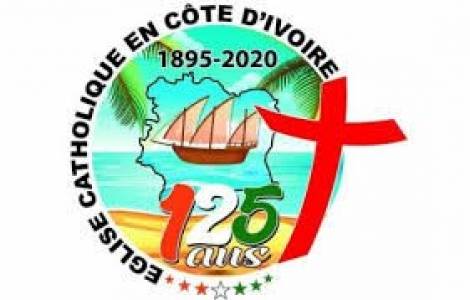 2021-03-08
Protection of minors and vulnerable people: a challenge for the Church

2021-02-10
New headquarters for the "Foundation Our Lady of Africa, Mother of All Graces", committed to faith and charity

2021-02-08
International Day of Fraternity for all people: "Peace is a highly spiritual value"

Abidjan (Agenzia Fides) - "January 24, 2021 marks the solemn closing of the celebrations for the 125th anniversary of the evangelization of our country and the closing of the 117th Plenary Assembly of the Catholic Bishops' Conference of Ivory Coast (CECI), which will be held at the Cathedral of Saint Esprit in Mockeyville, in the diocese of Grand-Bassam", said Fr. Emmanuel Wohi Nin, General Secretary of the CECI.
The celebrations for the 125th anniversary of the Evangelization of Ivory Coast began three years ago. The conclusion of the celebrations will be marked by a great day of prayer, adoration and intercession, a concert of songs of praise and adoration, masses to be held in all parishes on Sunday January 17th and a triduum of prayer from 19 to 21 January.
According to the Ivorian bishops, this jubilee will be the starting point for a new stage in the evangelization of Ivory Coast, of which all should now be witnesses.
And this requires a new mentality and a change in behavior, as the Secretary of CENI emphasizes: "we must learn to move from a Christianity with small roots to a more dynamic faith that is in the midst of all socio-cultural, religious, economic and political upheavals whom we are faced with, increasingly committed to building the Church and building the country".
Father Emmanuel Wohi Nin, who recalled the two Synod of Bishops' assemblies for Africa in 1994 and 2009, pointed out that these were the reference points in building a dynamic African Church, with the 125th anniversary being understood as
a providential event.
"The Jubilee enables us to grasp life with all its intensity, taking on the one hand the immense missionary work of the pioneers of evangelization in Ivory Coast and on the other hand the responsibility that everyone bears for the pursuit and deepening of this work", he says.
"We believe that the celebration of this jubilee marks the presence of God at the center of the history of our country, and that it will undoubtedly orient us towards the perspective of 150 years and will further inspire us to build a more Ivorian Church, a Church present in the life of the Nation and above all remains missionary and open to the universal Church", he concludes.
After several unsuccessful attempts at evangelization (1637,1687,1701,1844,1850), the date of 28 October 1895 was finally considered as the one that saw the beginning of the true evangelization of Ivory Coast with Fathers Alexandre Hamard and Emile Bonhomme, of the Society of African Missions (SMA) in Lyon. (S.S.) (Agenzia Fides, 7/1/2021)