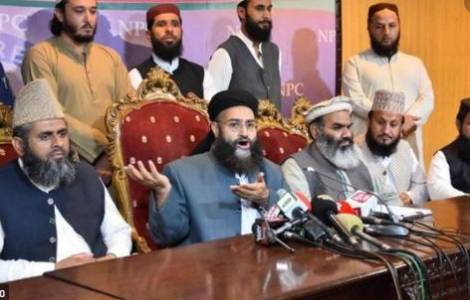 Lahore (Agenzia Fides) - "We appreciate the government's renewed commitment to the protection of religious minorities in Pakistan, especially for the protection of those falsely accused and for the protection of innocent underage girls trapped in forced conversions and marriages. The initiative of the Government Office for Interreligious Harmony will certainly strengthen peace and harmony between people of different religions and help ensure that members of religious minorities do not to live in fear": with these words, released to Agenzia Fides, Bishop Samson Shukardin OFM, Bishop of Hyderabad and new President of the National Catholic Commission for Justice and Peace (CCJP) welcomed and appreciated the initiative of Hafiz Tahir Mehmood Ashrafi, head of Pakistan Ulema Council (PUC), and Special Advisor to Prime Minister Imran Khan for religious harmony. The Islamic leader launched a new initiative for the protection of religious minorities living in Pakistan, entitled "Appeal to non-Muslims in Pakistan", announcing the creation of a special section within the Government Office for Interreligious Harmony, dedicated to specifically addressing the problems and issues relating to religious minorities.
From time to time we hear episodes of forced conversions, forced marriages and people threatened in the name of religion from different parts of the country," said Ashrafi. "In order to combat these problems and especially to stop the abuse of the blasphemy law in Pakistan, on the instructions of our Prime Minister Imran Khan we have established a new department in our Office".
Hafiz Tahir Mehmood Ashrafi, launching the initiative, said: "The government of Pakistan is committed to protecting religious minorities from becoming victims of forced conversions and forced marriages, as well as false accusations under blasphemy laws". "The government will set up appropriate Interfaith Harmony Councils across the country to promote religious tolerance. These councils include representatives from all Islamic schools so that abuse of blasphemy laws can be prevented".
Hafiz Ashrafi, who with his team also helped save six Christians in Lahore in November (see Fides, 5/12/2020), explains: "In the past two months we were able to intervene and solve 101 cases, and with the help of Islamic scholars and religious will find a solution that will save 101 non-Muslim Pakistanis from abusive laws and false accusations. Under the leadership of Imran Khan, we want to ensure equal rights for all citizens. We plan to train imams on the themes of interreligious harmony, interreligious dialogue and tolerance".
Fr. James Channan OP, Director of the Peace Center in Lahore, sharing his thoughts with Fides, said: "The commitment of the Council for Interreligious Harmony of Pakistan, in favor of the protection of religious minorities, is very positive and is a message of hope for us in the new year". Fr Channan urges: "We encourage all of our religious leaders and Christian politicians to spread the message and the appeal launched by Hafiz Tahir Mehmood Ashrafi of the Government's Interfaith Harmony Office, in order to quickly get help for non-Muslims citizens who are suffering from abuse of their dignity or rights".
(AG-PA) (Agenzia Fides, 7/1/2021)