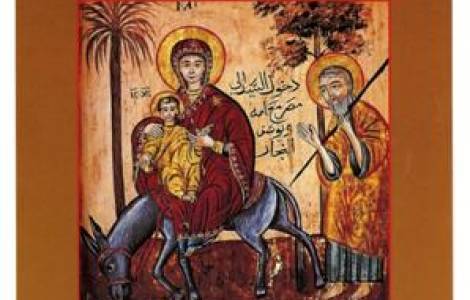 2022-01-10
Patriarch Tawadros: “Exclusive priesthood for men is based on the desire of Christ”

2022-01-04
A time of "spiritual awakening" in memory of the Coptic Martyrs of Libya, who died whispering the name of Jesus

2021-12-30
Coptic Patriarch Tawadros: anti-Covid vaccines developed by scientists are a "blessing" from God for the entire human family

Cairo (Agenzia Fides) - The "Way of the Holy Family" is "the Christmas gift that Egypt gives to the world". Even the pandemic, which has also paralyzed tourism around the world, has not stopped the great project supported by the Egyptian authorities aimed at opening up to international pilgrimages the itinerary that unites places crossed, according to millenila traditions, by Mary, Joseph and the Child Jesus when they were in Egypt to escape the violence of Herod. This was reiterated at the beginning of 2021 by Adel al Gindy, director general of International Relations at the Authority for the Development of Tourism and Coordinator of the project.
In a long interview, relaunched by wataninet.com, the engineer explained in detail the progress of the project, providing detailed information on the works already carried out or in progress to make each stage of the itinerary accessible to tourists and pilgrims according to the standards of reception corresponding to the criteria (including those of environmental sustainability) defined by the World Tourism Organization. The project, already defined in detail, is relaunched on the occasion of Christmas - which Coptic Christians celebrate on 7 January -, while the investment plan, which includes a substantial contribution from private financiers and international organizations, will be exposed in detail within the next two months.
The "Way" unites 25 places dear to the memory of Egyptian Christians, winding along an itinerary of 3,500 kilometers, which crosses 11 Governorates, from the Nile Delta to Upper Egypt. Once developed, the "Way" will represent one of the largest religious pilgrimage routes in the world. The project represents an investment not only economic but also ideal for the entire Egyptian nation, also stricken by the pandemic. The expectation of the end of the pandemic in Egypt is also based on the hope of gathering in the future an increasing flow of tourists and foreign pilgrims, attracted to the country by the desire to follow in the footsteps of the passage of Saint Joseph, the Virgin Mary and the Child Jesus in Egyptian land.
For some time now, as reported by Agenzia Fides (see Fides, 19/9/2018), the Egyptian authorities have been committed to promoting the "Way of the Holy Family" also in terms of tourism. On 4 October 2017 (see Fides, 5/10/2017) Pope Francis, in the context of the general audience on Wednesday, greeted a large Egyptian delegation that arrived in Rome to promote pilgrimages along the "Way of the Holy Family" in collaboration with L'Opera Romana Pellegrinaggi, institution of the Vicariate of Rome, organ of the Holy See, directly dependent on the Pope's Vicar for the Diocese of Rome, Cardinal Angelo De Donatis (GV) (Agenzia Fides, 5/1/2021)

ASIA/VIETNAM - In the name of compassion, believers of different faiths help the sick and suffering

ASIA/SYRIA - Father Jacques Mourad: the monastery of Mar Elian, devastated by jihadists, could soon return to being a place of prayer and peace