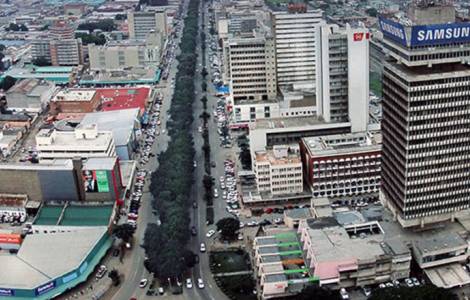 Lusaka (Agenzia Fides) - Zambia is a country almost unknown to international news. There are no wars, tribal clashes, hunger, drought, locusts, dictators, at least until yesterday. However, in recent weeks the country has entered a worrying spiral. In November, the Eurobond coupons were not paid for a total of USD 42.5 million while the payment of USD 391 million due to the China Development Bank was postponed until April 2021. The debt of Zambia has more than doubled in the past five years, from USD 4.8 billion in 2014 to USD 11.2 billion in 2019 and from 18 to 48% of GDP. Inflation rises and the currency depreciates: in November, Zambia's annual inflation rate rose to its highest level in the last four years (17.4%.), as the kwacha lost 33% of its value against the USD.
All of this has caused, as documented in a recent report by the Jesuit Justice and Ecology Network Africa "a rapid weakening of the economy which is endangering the economic and social life of ordinary citizens, especially the poor, the marginalized and the vulnerable". Default would mean the impossibility of contracting new loans and accessing foreign currencies. This would make it more expensive for Zambia to import goods and would have effects on economic growth and at the same time on the overall competitiveness of the country. This would practically mean drastic cuts in social services or more taxes for citizens to pay off the debt.
The Catholic Bishops have expressed their concern over the collapse of the economy and the effects on the poorer population. The president of the Episcopal Conference, His Exc. Mgr. George Lungu invited the government to come out of its comfort zone and "take note of the silent cries of our people".
According to Neil Thompson, a researcher at the Economist Intelligence Unit: "Zambia's debt crisis will not be resolved in the short term. Politicians will continue to think about their re-election first". In fact, in August 2021, the presidential elections will take place and the outgoing President, Edgar Lungu, is already trying to secure his re-election. He primarily wants to insert an amendment in the Constitution that allows the formation of a coalition government if none of the candidates obtains more than 50% of the total valid votes cast. If no candidate for the Presidency were to exceed 50% of the votes in the first round, the candidate with the most votes could propose a deal to a less fortunate candidate of his choice with which he would achieve 50% + 1 of the votes cast. In the absence of agreement, a waiver would then be organized. Local dailies qualify the amendment as transforming the smaller parties into King.
However, the bill, in order to be approved, requires a two-thirds majority of parliamentarians and therefore if all members of parliament of the main opposition party, the United Party for National Development (UPND) were not to give in to the sirens of the majority, the measure will not pass. The alternative would be to abolish the current electoral rolls and establish new ones by giving only 30 days to those entitled to register. This would deprive the rights of many citizens of rural areas, areas in which the opposition won a majority of the votes.
In fact, the President is eliminating the legal possibilities of the opposition by indirectly promoting the risk of disorder and violence. (F.F.) (Agenzia Fides, 29/12/2020)

AMERICA/NICARAGUA - Bishops to the government: elections, an opportunity to resolve the country's crisis

AMERICA/BRAZIL - REPAM: alarming increase in the number of infections and deaths due to Covid-19 in the pan-Amazon region

AFRICA/NIGERIA - Bishops warn of a split in the country

ASIA/CHINA - Bishop Joseph Zong Huaide died at the age of 100: he devoted himself to prayer and charitable works