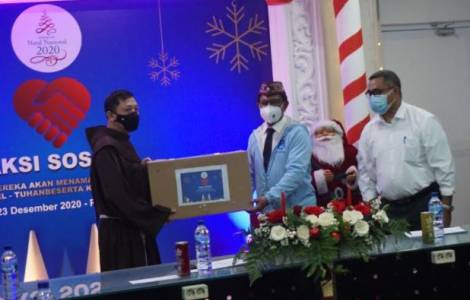 Jakarta (Agenzia Fides) - For the Catholic community in Indonesia, this year Christmas was celebrated both in a virtual way - thanks to new technologies - and through concrete gestures of closeness and sharing with the poorest, accomplished by Christians but also as leaders of the civil community.
As Agenzia Fides learned, Indonesian President Joko Widodo took part in the Christmas celebration, recalling the key message of Christmas during the global pandemic: hope. "During this difficult period due to the pandemic, hope can generally be lacking. During the Christmas period, we will see small candles everywhere that represent that there is always hope: the presence of God, Emmanuel, who will always be with us", he said, inviting all Indonesians to cultivate hope.
"The presence of God who takes care of us, his mercy will allow us to throw away our concerns behind our shoulders in order to face this difficult moment for us", said thePresident in his message on the occasion of Christmas.
Speaking from the Cathedral of Jakarta, where he celebrated the Christmas Mass broadcast online and followed by thousands of faithful, Cardinal Ignazio Suharyo, Archbishop of Jakarta and President of the Catholic Bishops' Conference of Indonesia, remarked: "The pandemic has strongly affected our daily life. Our lives have also been largely influenced by hate speech and fake news, related to Covid-19. All these illicit attitudes have clearly shown those who have a superficial faith or exercise their religious belief in a non-serious way".
The Cardinal criticized "the lack of respect for our noble national ethics" and exhorted: "During this difficult period, we are called to seek inspiration in the strength of faith", recalling the national theme of the Pastoral Year: "And they will call him Emmanuel - God is with us".
Christmas in Indonesia is also marked by the distribution of 10,000 parcels of basic foodstuffs to Christian orphanages, homes for the elderly and assistance centers for the disabled. The public donation of these foods was symbolically launched by the Indonesian Minister for Information and Communication, Johnny G. Plate, who visited the St. Vincentius orphanage in central Jakarta.
Plate has also donated many useful devices for distance learning to the Indonesian Amateur Radio Association which will start a specific distance learning program in some remote places in the province of Papua. The Minister announced that the government will set up more than 3,100 reception and transmission antennas in all remote areas of Papua by the year 2021-2022, so that "83,000 villages throughout Papua will have full access to 4G signals", for the benefit of school students, explained the Minister. (MH-PA) (Agenzia Fides, 28/12/2020) 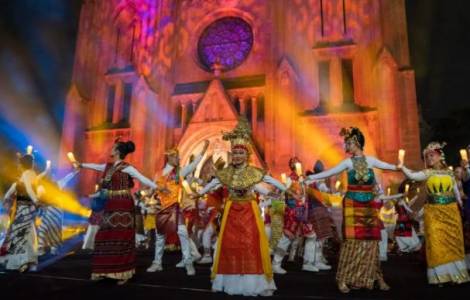 ASIA/BANGLADESH - Radio Veritas in Bengali, a station also listened to by Muslims, celebrates 40 years of proclaiming the Gospel