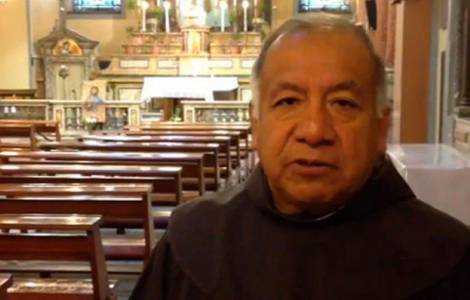 Istanbul (Agenzia Fides) - His Exc. Bishop Rubén Tierrablanca Gonzàlez OFM, Apostolic Vicar of Istanbul for Latin Rite Catholics, did not survive Covid-19 against which he had been fighting for the past few weeks in an intensive care unit. The Bishop passed away on the evening of Tuesday 22 December, at the age of 68, saddening all those whom he had comforted in the course of his life thanks to the gift of his simple faith and his charity always ready to help the most needy.
Originally from Mexico, born in Cortazar on August 24, 1952, he entered the novitiate of the Friars Minor in 1970. After his years of formation, he made the solemn vows in 1977 and received priestly ordination the following year. During his years in Rome, he had also been Rector of the Antonianum University from 1992 to 1997 and then guardian of the Franciscan General Curia from 1997 to 2003.
Starting from that year he was sent to Turkey, where he served as guardian of the convent of Istanbul and of the International Fraternity for Ecumenical and Interreligious Dialogue in Turkey and as parish priest of Santa Maria Draperis parish. On April 16, 2016, Pope Francis appointed him Apostolic Vicar of Istanbul. Since 2018 he was President of the Bishops' Conference of Turkey.
Ordained bishop, he had chosen "Unum in Cristo" as his episcopal motto, also signifying his dedication to promoting unity among Christians: "His pastoral style", Dominican father Claudio Monge tells Agenzia Fides, "was characterized by closeness and good-natured patience. He weaved relationships step by step, in the fabric of daily life, and always supported the occasions of common prayer with Christians of other Churches that I too have tried to promote in recent years here in Istanbul".
Bishop Tierrablanca maintained relations of friendship and spiritual closeness with Ecumenical Patriarch Bartholomew and also with the Armenian Patriarchate of Constantinople and with the Metropolitan of the Orthodox Syrians. He also cultivated fraternal relationships with Muslims and Jews, always showing respect for civil authorities. His charitable initiatives were known, also through Caritas Istanbul, aimed at all the needy without distinction of ethnic or religious affiliation, which had intensified in recent months, with the distribution of food vouchers and the offer of residential services in the face of the emergency caused by the pandemic which had further worsened the living conditions of many immigrants and homeless in the Turkish metropolis. "Where he was present, the door was always open to everyone", one of his friends told Fides. While Capuchin friar Domenico Bertogli, parish priest in Antioch on the Orontes, remembers him as "a true man of peace and harmony, an authentic Franciscan". (GV) (Agenzia Fides, 23/12/2020)

AMERICA/UNITED STATES - Testimony of a Franciscan after the violence on the Capitol Building, there is need to start afresh from the search for peace and the common good

AMERICA/VENEZUELA - Medicine to save lives: guaranteeing everyone the right to health and access to medicines