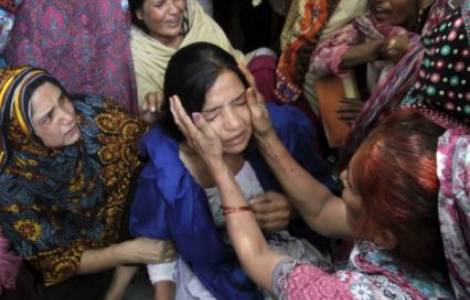 Karachi (Agenzia Fides) - A Karachi court of first instance has granted bail to the kidnapper of the Christian minor Arzoo Raja, setting the bail at 500,000 Pakistani rupees (about 2,700 euros) and a similar bail for his accomplices such as the Imam who celebrated the child marriage, and the kidnapper's assistants. This is what Agenzia Fides learns from Mohammad Jibran Nasir, the lawyer for Arzoo Raja's family. Commenting bitterly on the decision, the lawyer explains: "We will appeal. The judge's decision came on December 17, after the lawyers of the kidnapper Ali Azhar applied for bail".
The news of the granting of bail to the main defendant Ali Azhar and to the co-defendants saddens and hurts the religious minorities of Pakistan. Dominic D'Souza, a Christian activist who follows the case of Arzoo, warns against the effects of such provision: "There is no justice for minorities in Pakistan. Arzoo is not safe now, they will certainly visit her at her family home and they may intimidate her. Arzoo and her family need protection".
Muslim activist Osama Mehtab appreciates the efforts of lawyer Mohammad Jibran Nasir to bring justice to Arzoo Raja's family, noting: "Continue to fight for justice: people like you work to save our dignity and make us feel less ashamed and embarrassed. for the injustices that happen to religious minorities".
Arzoo Raja, the 13-year-old Catholic girl, was kidnapped, forcibly converted to Islam, and then forced to marry a 44-year-old Muslim named Ali Azhar (see Fides, 21/10/2020). The case was presented before the High Court of Sindh which, after having ordered medical examinations to obtain Arzoo Raja's age, declared the marriage invalid, considering it a case of child marriage. Arzoo Raja was sent to a state-run shelter home, while the High Court sent the defendants to trial before a lower court in Karachi (see Fides, 23/11/2020).
The trial, which began in court on December 9, 2020, considers Arzoo's kidnapper, Ali Azhar as the main defendant under article 376 of the Pakistani Penal Code, for raping an underage girl and for violating the Sindh Child Marriage. The co-defendants and witnesses of the marriage who allowed the criminal plan to be carried out have also been accused (see Fides, 11/12/2020). (AG-PA) (Agenzia Fides, 19/12/2020)

ASIA/INDIA - Missionaries of Charity accused of proselytizing: for Catholics it is pure defamation