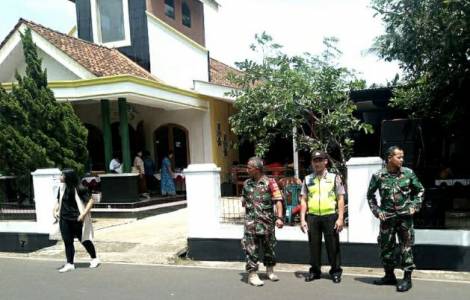 Jakarta (Agenzia Fides) - In almost all the provinces of Indonesia, the safeguarding of Christmas and New Year celebrations is a particular concern for local governments, police, civil society organizations and religious communities, as cases of violence or attacks against Christians during the Christmas period occurred in the past.
Christmas 2020 is marked by the pandemic. In a public letter on how to organize the service on the occasion of the Christmas holiday, the Indonesian Minister for Religious Affairs, Fachrul Razi said that, in today's emergency situation linked to the pandemic, Christians - depending on the various local situations in different regions - will also be able to celebrate Christmas in churches, provided that the assembly in the church respects the anti-Covid protocols and distancing, with a capacity of less than 50% of the normal capacity of the building, and ensuring that the religious rite is transmitted live on online platforms.
Therefore, the opening of the churches raises the question of adequate vigilance: there are more than 8 thousand members of the Indonesian security forces (including the army, police, local guardsmen) in service in the Jakarta region intended to guard the churches, monitor and protect the peaceful conduct of the Christmas celebrations. "There are 361 churches located near mosques in different parts of the country, so special attention should be paid", said Yusri Yunus, head of the Public Relations Department of the Jakarta Regional Police.
In the province of Bengkulu, on the island of Sumatra, the police have also prepared to organize the Christmas security service throughout the province and ensure the safety of the community, by setting up military posts near places of worship, highly frequented public places and provincial roads.
The service also involves young Muslim volunteers, in the sign of interreligious dialogue: as many as 500,000 members of the youth movement "Anshor and Banser" - the largest social youth organization in Indonesia, affiliated with the Muslim movement "Nahdlatul Ulama" - will be deployed as personnel to help guarantee a security and order service aimed at protecting churches at Christmas and New Year in the West Java region. Deni Ahmad Haidar, president of the youth movement in West Java, confirmed that in 2020, as every year, "Ansor and Banser" participates and makes its members available, in agreement with the civil authorities, to offer assistance in monitoring, for the celebrations of Christmas and New Year 2020
"This year we are also ready to take sides with our Christian brothers so that their celebration can be lived in safety and peace. We are awaiting instructions from public security officials", explained Haidar. The president hopes that "the peaceful celebration of this religious event will strengthen unity and integrity at a time when the country is being tested by the pandemic and by religious extremist episodes", such as the one that occurred in recent weeks in SUlawesi (see Fides).
Speaking to Fides, Permadi Arya, Indonesian Muslim and active member of "Ansor and Banser", confirms his availability, noting that "this activity has become an annual appointment for us, and is carried out for the common good, religious harmony and social solidarity".
"Thanks to the police security agents and also to the Muslim friends of Anshor and Banser, we feel protected for the celebration of Christmas", said to Fides Filipus Ari Susanto, one of the faithful of the parish of St. Mikahel in Bandung city of West Java. "This collaboration also strengthens and nurtures our sense of fraternity and the climate of peaceful coexistence with the Muslim community", he notes.
The aim is to prevent and avoid the violence that tragically marked these holidays in the past: in 2000 in various places in Indonesia such as Jakarta, Bekasi, Sukabumi, Mataram, Pematangsiantar, Medan, Batam and Pekanbaru, a series of bombs exploded on 24 December. Similar attacks also occurred in 2004, while the most recent episode of violence was the terrorist attack on several churches in Surabaya, East Java in 2018.
Indonesia is a country of 270 million people, with the largest Muslim population in the world (230 million). There are 24 million Christians in the country, of whom 7 million are Catholics. (ES-PA) (Agenzia Fides, 18/12/2020)