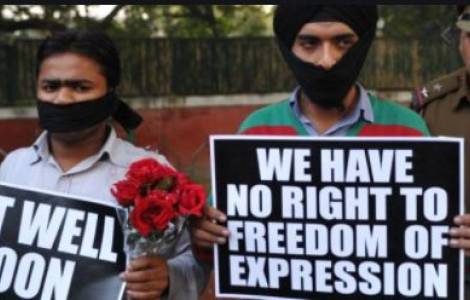 New Delhi (Agenzia Fides) - "The year 2020, marked by the Covid-19 pandemic, was a particularly bad year for human rights in India: in a systematic and brutal way, the legitimate rights of the people were repressed and denied. The victims are mainly the poor and marginalized, the Adivasis and Dalits, women and children, vulnerable workers. In addition, human rights defenders who criticized the government and called for the constitution and democracy to be protected have fallen victim to measures that have a taste for revenge", said Fr. Cedrik Prakash, a Jesuit committed to the promotion of human rights and social integration in India.
Father Parakas urges a full and absolute commitment of the government, of all social and religious forces for the protection of human rights in India. He recalls, among the most recent initiatives that confirm the rather critical situation, that on November 26, more than 250 million people in India went on strike to protest against the government's policies which are harmful to the rights of farmers and workers. "The peasants - notes the Jesuit – protest because their rights are denied. Another particularly weak category are migrant workers and internally displaced persons, who are often trampled on.
"We saw in March last year, when the first lockdown for the pandemic was announced, millions of migrant workers who were stranded without food, money and shelter", continues Father Prakash, "their rights are denied: the working class suffered tremendously during the pandemic.
The Jesuit also mentions the "Adivasis", or tribal populations, "delegitimized and abused because the areas in which they have lived for centuries are destined for industrialization, mining, so-called "development" projects. Over two million of them, and other forest dwellers, are still at risk of forced displacement", he notes.
The problem of religious minorities is also mentioned: "Muslims and Christians are victims of hate speeches, constant denigration and even physical aggression", he affirms, and reminded of the basic human right of religious freedom.
With reference to the Encyclical "Laudato Sì" the Jesuit emphasizes with regard to human rights: "The environment is being destroyed by the growth of polluting industries without the necessary environmental protection measures being taken and this often leads to a lack of sensitivity and corruption", he remarked.
"This government hardly tolerates disagreement and systematically violates the rights of human rights activists and NGOs, which damages an essential dimension of democracy," concluded the Jesuit, who referred to the declaration of the United Nations High Commissioner for Human Rights regarding the fate of the Jesuit father Stan Swamy (see Fides, 9/10 and 20/20/2020) and fifteen other activists who are currently in prison under the draconian "Unlawful Activities Prevention Act", under which they are accused of complicity with terrorist groups or subversive. (PA) (Agenzia Fides, 10/12/2020)

AFRICA/DR CONGO - 29 years ago: commemoration of the March of Hope

AMERICA/COLOMBIA - The Bishops: "unemployment is one of the most urgent challenges if we want to overcome this crisis"