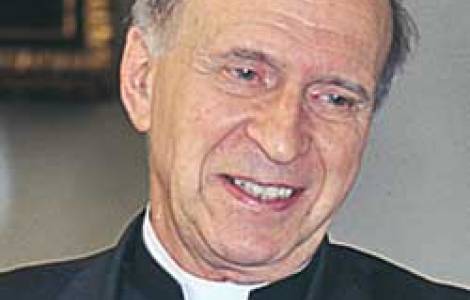 2021-04-10
Augustinian missionaries: "Restoring hope for the future to young people"

Algiers (Agenzia Fides) - He left this world on the feast of Blessed Charles de Foucauld: Henri Antoine Marie Teissier, Archbishop Emeritus of Algiers, died yesterday, December 1st, at the age of 91, due to the consequences of a stroke after a life marked by a life dedicated to the Algerian people with evangelical passion and missionari service among of the Christian communities scattered across Algeria that he loved so much.
Henri Tessier was born in Lyon in 1929 and went to Algeria when he was still a young seminarian. There he was ordained a priest in 1955 by the then Archbishop of Algiers, Cardinal Léon-Etienne Duval. In 1966 he received the Algerian citizenship and in 1972 he was appointed Bishop of Oran by Pope Pope Paul VI. In 1980 he became coadjutor of Archbishop Duval, and followed him in this office from 1988 to 2008 - at the head of the Archdiocese of Algiers.
During the twenty years of his service at the head of the Archdiocese of Algiers, the country went through the dark ages of terrorism and Islamist massacres. Among the countless victims of this bloody time, the 19 men and women religious of the local Catholic Church - including Bishop Pierre Lucien Claverie and the seven monks of Tibhirine - murdered between 1994 and 1996, were proclaimed Blessed on 8 December 2018 in the beatification liturgy celebrated in Oran. "I have a memory of everyone. They were my brothers and sisters. I met each of them a few days before they were killed", said Archbishop Teissier in an interview with the missionary magazine ‘Mondo e Missione’. During those years he was forced to move around only with personal protection. "Our brothers and sisters killed" added the Archbishop speaking of the new martyrs of Algeria "celebrated or attended Mass every day, aware that perhaps it would be the last time. (…). They were victims of violence in the places where they lived and were known. The attackers wanted to show that those relationships and that sharing had to end. But it was not like that. The vast majority of priests, men and women religious and lay people have decided to stay".
In the long years spent at the service of the Algerian people and the local Church, Archbishop Teissier devoted his time and energy to rediscovering great African personalities of the early Christian centuries, starting with St. Augustine. "Europeans" explained Teissier "need to know that a significant part of their Latin-Christian roots lie in the southern Mediterranean. And the people of the Maghreb must also know what role their ancestors played in a cultural and religious tradition that now seems completely foreign to their land. An awareness that can also be of importance for the young Churches in Africa, who see their spiritual sources as exclusively European , forgetting not only the Eastern origins of the Bible and the development of Eastern patristics, but also the role of Roman Africa".
In a 2003 report, the Archbishop of Algiers recalled among other things that "around the year 200, at the first Council of Carthage, there are already seventy bishops of Roman Africa under the leadership of Agrippino. During the same period, in northern Italy it is not known whether there were other bishoprics other than those of Rome, Milan and Ravenna ". Moreover - added Teissier - the African influence in Rome had made itself felt "as early as 189, when Victor, an African from Leptis Magna, was elected Pope in Rome (189-198). This shows the role that the Church of Africa must have had in Rome since the end of the second century. And in the third and fourth it will continue to increase" .
In 2001, Archbishop Teissier was the protagonist of the great convention on Saint Augustine organized in Algiers to rediscover the African nature and universality of the Holy Bishop of Hippo. "During the fundamentalist crisis in which the country plunged from 1990 to 2000", recalled Teissier, "the first struggle for freedom, linked to Augustine, was to speak freely about him in Algerian society" when fundamentalist sectors branded the saint of Hippo as as an "infidel" subject to the "Western" imperialism of Ancient Rome. In his contributions dedicated to Augustine, Archbishop Teissier recalled how the saint was in Milan after his conversion and baptism and wanted to return to his homeland in order not to abandon it anymore. Augustine also exercises this freedom to position himself in his own culture within the Church". In an interview in 2001, Archbishop Teissier told the monthly ‘30Giorni’ how useful it was for the current mission of the Church to rediscover the figure of Augustine of Hippo and his theology of grace, full of precious suggestions on how to communicate the Christian message to the men and women of today: "Our Muslim friends", Archbishop Teissier remarked in this interview, "want religion to have all its importance in the total life of society. They do not accept the distinction between the temporal and the spiritual that takes place (more or less) among Christians, and they say that the whole civilians must be subject to God’s law. When Augustine walks in the city of God he walks simultaneously in the city of men and certainly shows the indispensability of the city of God in the existence of man, but there is no theocracy. The important thing is not to have a religious Christian leader who imposes his convictions on society through religious obedience, but that each of the believers opens himself to the grace of God, to the gift of God". (GV) (Agenzia Fides, 2/12/2020)

ASIA/IRAQ - Coronavirus pandemic: Election of the new Assyrian patriarch postponed due to new wave of infections

AMERICA/EL SALVADOR - Dedicated to St. Oscar Arnulfo Romero, Bishop and Martyr, the hospital chapel where he was killed

AFRICA/MOZAMBIQUE - New attack on Palma; UNICEF warns of an escalation of the humanitarian situation