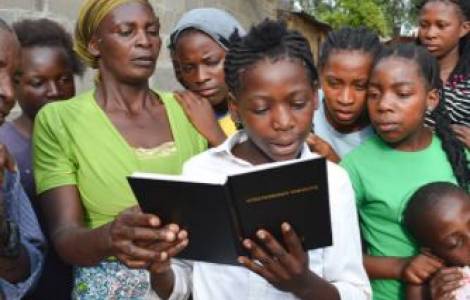 2021-01-09
Testimony of a missionary: "In times of pandemic, the first evangelization remains our starting point"

Abidjan (Agenzia Fides) - "To celebrate the 49th anniversary of the passage to heaven of our founder, Blessed James Alberione, the Pauline Family represented here in the Ivory Coast by the daughters of St. Paul begins with the great Pauline Family in the world, a year dedicated to the Bible": said Sister Gemma Galfre, at the head of the community of the daughters of St. Paul (Pauline nuns) during the celebration of the opening of the biblical year of the Pauline family in the Ivory Coast, on 26 November.
According to Sister Gemma Galfre, "this biblical year wanted to respond to Pope Francis' solicitude to go to the existential peripheries, that is, where man has no more reason to live, man has forgotten that there is a Bible, a God who wrote this letter to humanity", she explains, indicating that their mission in the Church is to nourish man's intelligence, heart and will with the word of God. Aspects, she says, which are part of the spirituality and formation of the daughters of St. Paul, who in turn try to pass on to the men and women they meet.
The opening celebration of the Biblical Year was presided over by Fr. Mathieu Krou, secretary of the diocesan curia of Yopougon who in a brief exhortation, starting from the Gospel of St. John 1: 1-14, invited everyone in their daily life to meditate, listen and observe the word of God.
"Whoever listens to the word of God and keeps this word in his heart, it is God who he feels, it is God who he holds in his heart and who has eternal life; hence the importance of the word of God in our life".
The Biblical Year centered on the theme "That the Lord’s Message May Spread Quickly" will focus on various activities: biblical productions, biblical weeks and biblical broadcasts broadcast by Catholic radio stations in the country. Special emphasis will be placed on divina lectio, a practice that will help meditate, pray and live the word of God.
The Daughters of St. Paul form a religious Congregation of pontifical right, founded in 1922 in Italy by Father James Alberione and Sister Tecla Merlo. Its purpose is to spread the Gospel through the press and new means of communication. They are present on five continents and in 52 countries, with 220 communities. (S.S.) (Agenzia Fides, 28/11/2020)

ASIA/PHILIPPINES - Love for the Word of God in the midst of the pandemic: key to evangelization