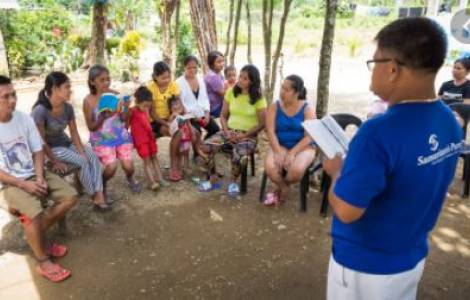 Manila (Agenzia Fides) - On the occasion of the 500th anniversary in memory of the arrival of the Christian faith in the Philippines (1521-2021) the bishops of the country invite to the faithful to "missio ad gentes". The special year announced by the Bishops' Conference of the Philippines - after a ten-year period of preparation - in view of the anniversary, is precisely dedicated to the "missio ad gentes".
"The Filipino Church is delighted to take part in the 500th anniversary celebrations in memory of the arrival of Christianity in our beloved homeland. Five centuries ago we received the wonderful gift of faith: our hearts are overflowing with joy and gratitude", writes Archbishop Romulo G. Valles, President of the Philippine Bishops' Conference (CBCP), in a pastoral letter sent to Agenzia Fides, which will be read in all parishes, communities and national institutions on November 29, the first Sunday of Advent and the beginning of the new liturgical year. Archbishop Valles notes in his pastoral letter that the "generous, abundant and free love of God" has chosen the Philippines among all nations and peoples "to receive this precious gift".
The Archbishop continued that the Christian faith arrived, developed and prospered in the country thanks "to the dedication and heroic sacrifices of thousands of missionaries, men and women from various parts of the world". The Archbishop recalled that these missionaries "wanted to share with others the gift of faith that they had received". "That particular 'talent' that has motivated generous missionaries over the centuries must also kindle the hearts of all of us today, so that we commit ourselves in missions here in our country and in other countries to go to those who do not know God: the missio ad gentes".
"We pray for a missionary renewal of our Church - both 'ad intra' and beyond our borders, ad extra - during our celebration of the 500th anniversary of the arrival of the Gospel", says Mgr. Valles, referring to Pope Francis' document "Evangelii Gaudium" and states that the country needs a "missionary change" that puts the evangelization of today's world at the center. "We try to renew the missionary enthusiasm of all the baptized", writes the Archbishop, who also recalls the words of Pope John Paul II during his visit to the Philippines in 1981, who wished: "the Filipinos to be the first missionaries of the Church in Asia". "This – said Archbishop Valles - is a clear invitation to participate in the missio ad gentes!".
The President of the Philippine Bishops' Conference reminded all Catholics that all pastoral activity of the Church must be "missionary" and that all believers are called to be authentic "missionary disciples". In addition, he adds, "it is necessary to cultivate a deep personal relationship with Christ", as Pope Francis emphasizes in "Evangelii Gaudium", so that all Christians become "agents of evangelization".
Christians - he notes - are called to radiate mercy, joy and peace in their ministry in parishes, communities, associations and movements. "Missionary impulse must become the standard for every Christian", says the president of the CBCP.
During the nine-year preparatory cycle (from 2013 to 2021), the Bishops' Conference had set a specific theme every year in order to deepen the missionary character of the Philippine Church to celebrate the 500th anniversary of the arrival of the Christianity in the Philippines.
The main celebrations of the Jubilee year and pastoral and missionary activities across the archipelago, originally planned for April 2021, has been extended to April 2022. The decision to postpone the date of the historic event was made as a result of the measures taken to contain the Covid-19 pandemic.
Spanish missionaries brought the Christian faith to the country 500 years ago. Today the country has the largest Catholic population in Asia with 80% Catholic believers out of a population of 110 million. The country has 86 Catholic dioceses. (SD-PA) (Agenzia Fides, 27/11/2020)

ASIA/PHILIPPINES - In times of pandemic, "preaching and bearing witness to the Gospel are particularly important"