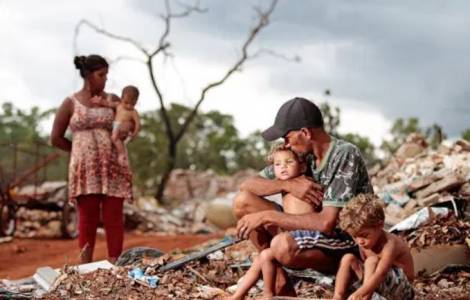 Curitiba (Agenzia Fides) - "Every person has a dignity. We have to look at the person, especially if they are very poor, recognizing their dignity: the presence of God is also shown in this dignity. In Brazil, too, the charism of the Servants of the Poor is a service to the poor and the forgotten, to the most vulnerable and needy. What our founder, Blessed James Cusmano often said, is to recognize Jesus Christ in the person of the poor, according to Jesus' message: 'Whatever you did not do for one of the least of these, you did not do for me' " explains Father Adenis Roberto de Oliveria to Agenzia Fides, on the mission of the "Servants of the Poor" in Brazil with regard to the pastoral and social engagement of the religious community in the parish of São José Trabalhador in the capital of the state of Paraná Curitiba.
"In Brazil - said the religious - the Servants of the Poor in all our communities in which they are present live the charism of closeness to those in need. It should be noted that, in addition to priests and religious, lay groups of the association named after Blessed James Cusmano work on a pastoral level and are very active in social matters by promoting charitable works. The laity who dedicate themselves to this service are independent and act within specific initiatives in which our priests assist them. In this way, charity becomes more widespread and people and families in particular are reached, and the church fulfills its mission by acting as a "field hospital". The criteria of our actions are interpreted as the evangelical criteria of closeness and sharing. These are two ways of evangelization, because the gospel is essentially a message of love". The "Servants of the Poor", also known as the "Opera del Boccone del Povero", is a male religious institute whose members are popularly known as Bocconisti or Cusmaniani, from the name of the founder, the Italian priest Giacomo Cusmano (1834-1888). The religious family of Blessed Cusmano today includes nuns, the "Servants of the Poor" friars and lay members of the "Giacomo Cusmano" Association, thousands of volunteers who are now in countries such as Mexico, United States, Brazil, India, Philippines, Uganda, Cameroon, Congo and Romania. (MI) (Agenzia Fides, 26/11/2020)