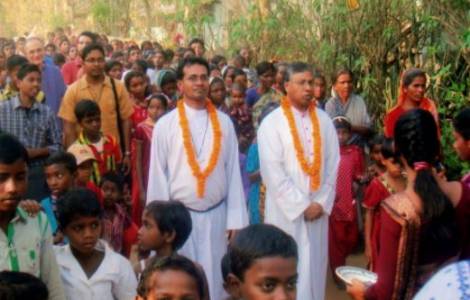 2020-12-29
Radio Veritas in Bengali, a station also listened to by Muslims, celebrates 40 years of proclaiming the Gospel

2020-12-03
Bangladeshi Christians ask for the release of Jesuit Fr. Stan Swamy in India

2020-11-26
The new Archbishop of Dhaka: priority to be given to the family, the “powerhouse” of the Gospel

Dhaka (Agenzia Fides) - The family will be the pastoral priority of the Archdiocese of Dhaka: the family as the subject of evangelization and as the recipient of all spiritual and material attention, as the apostolate in society passes through the family. This is what Mgr. Bejoy Nicephorus D'Cruze, OMI, appointed Archbishop of Dhaka on 30 September and who tomorrow, November 27, in a solemn Eucharist, officially takes possession of the episcopal seat in the Bangladeshi capital.
Archbishop D'Cruze illustrates the pastoral perspectives to Agenzia Fides: "In the pastoral plan we intend to give priority to the family. Every Christian family is like a powerhouse: it is there that the sparkle of the Gospel lights up, it is from there that children learn. Tomorrow, these children, who will have grown up in an environment where the Christian faith exists, will be responsible within the Church and in society. Adequate attention must be paid to the Christian family so that it can be a witness of Christ, protagonist of the Church's mission".
The chapter on the laity opens with the family. The Archbishop notes that "the laity can reach other people more easily than the religious, because the religious live and work in community, while the laity live immersed in the structures of the world. The laity therefore have a great opportunity to be witnesses of Christ. The laity are called to preach and bear witness to the Gospel of Christ in their daily lives, with the people they meet. We are all missionaries. Each baptized person also has the responsibility to proclaim the message of the love of Christ". Archbishop D'Cruze reports that he has read the ten-year pastoral plan approved in 2018 in the Archdiocese of Dhaka, noting that "the entire Catholic community, priests, religious and laity, will engage in the realization of this plan".
Remembering Cardinal Patrick D'Rozario, his predecessor as Archbishop of Dhaka, Mgr. Bejoy states: "Cardinal Patrick D'Rozario had a relationship of esteem and fraternity with the laity. He deeply involved the laity in pastoral activities. By following this example, I will keep that spirit, by involving and empowering the laity in activities and in the apostolate of the diocese".
At the level of the Bishops' Conference of Bangladesh, Archbishop Bejoy is president of the Episcopal Commission for Christian Unity and Interreligious Dialogue. This ecumenical spirit, he observes, will be an integral part of his pastoral action. "Ecumenical activities and relations and interreligious dialogue are well underway in Dhaka. We will try to make them penetrate in a more widespread way, at a parish level. In our time and in our context, interreligious dialogue is a powerful tool for establishing fraternal relationships with people of other faiths. As Catholics, we feel the responsibility to promote unity with other Christian denominations and to develop good relations with Muslim communities", he explains.
Another issue that the Archbishop intends to pay attention to is that related to internal migration in the country. In the city of Dhaka, people arrive from all over the country for reasons of study or work or even following the phenomenon of rural exodus. "In this megalopolis, internal migrants need material and spiritual care. They are often poor and vulnerable and constitute the 'existential peripheries'. We will take care of them", he says, citing another pastoral ministry to which he intends to give importance, namely that with detainees, who are often also forgotten.
Overall, concludes the new Archbishop, "my mission is to accompany and guide the path of holiness of the people of God in Dhaka. The call to holiness is a universal call. Today, many people are unable to attend Holy Mass due to a hectic life. The life of faith and the relationship with God are the foundations".
The new Archbishop of Dhaka Mgr. Bejoy Nicephorus D'Cruze, OMI, was appointed by Pope Francis on 30 September. Born in 1956 in Tuital, in the sub-district of Nawabgonj, which is part of the territory of Dhaka, he entered the Congregation of the Oblates of Mary Immaculate (OMI) and was ordained a priest in 1987. He was superior of the OMI delegation in Bangladesh and professor of the major Seminary of Dhaka. He was ordained bishop of the diocese of Khulna in 2005 before being appointed bishop of Sylhet in 2011.
According to data provided by the local Church, within the Archdiocese of Dhaka, in an area that welcomes about 24 million inhabitants, mostly Muslims, there are 75 thousand Catholics, divided into 19 parishes and 13 mission stations, served by 117 priests (among diocesans and religious), 341 sisters from different congregations, 115 lay missionaries and catechists.
Among the social works directly promoted by the Catholic Church in Dhaka, there are 7 clinics and medical dispensaries, 7 homes for the elderly and disabled, 10 hostels for young people or children, 3 orphanages. (FC-PA) (Agenzia Fides, 26/11/2020) 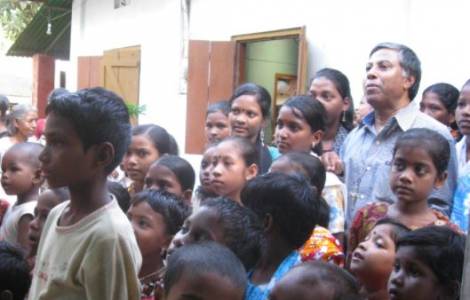 AMERICA/CHILE - "Christ Migrant of the World": a year of help and support for migrants in the Archdiocese of La Serena