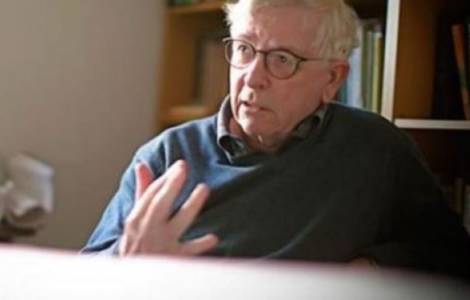 Seoul (Agenzia Fides) - Father Kevin Laurence O'Rourke, Irish missionary of the Society of Saint Columban, translated into English over 2,000 Korean literary works. His missionary work in the field of culture, university education, poetry and literature will remain engraved in the history of the Korean Church. As Fides has learned, it is with this conviction that the Catholic community of the peninsula celebrates and remembers the work of Father Kevin Laurence O'Rourke, who died on October 23 at the age of 81. He was a missionary and scholar who totally immersed himself in the Korean cultural context, receiving several awards for his distinguished contributions to Korean literature. He won the National Prize for Korean Literature in 1989 for his translations of Korean poems and in 2007 he was awarded honorary Korean citizenship for his merits.
Kevin Laurence O'Rourke, born in Cavan, Ireland, in 1939, entered the Missionary Society of Saint Columban and was ordained a priest in 1963. Sent on a mission to Korea, he began his pastoral ministry as assistant parish priest in the church of Soyangro in Chuncheon, Gangwon province. During his stay in South Korea, he showed great interest in Korean culture and literature and immersed himself in those studies. He became the first foreigner to obtain a doctorate in Korean literature from Yonsei University, Korea, in 1982. At the same time he began teaching at Kyung Hee University, a position he held from 1977 to 2005.
Father O'Rourke translated various collections of Korean poetry, novels and other literary works into English such as Choi In-hun's novel "The Square", Lee Mun-yol's "Our Twisted Hero", the So Chong-ju's collection of poems "Poems of a wanderer: selected poems of Midang So Chong-ju" and Yi Sang's "Wings: Volume 091". In addition to translating works of modern literature, he edited and translated works of traditional Korean literature such as song texts and poems from the Goryeo and Joseon eras. Among the various recognitions obtained, he was the winner of the Daesan Literary Award and won the second translation prize of the Korea Times in 1971.
In his words and lectures he always affirmed his great appreciation for Korean culture and history, for the mentality, character, strength and wisdom of the people of East Asia, characteristics that emerge from literary texts, throughout history. He paid tribute and recounted how the Korean people had accepted, through their tenacity, the message of the Gospel in their culture.
The Korean Church paid homage to him in the Korean Catholic University "Eunpyeong St. Mary's Hospital", while, according to his last wishes, his remains rest in Korea, his adopted homeland, in the house of the Missionary Society of Saint Columban in Seoul. (SD-PA) (Agenzia Fides, 25/11/2020)