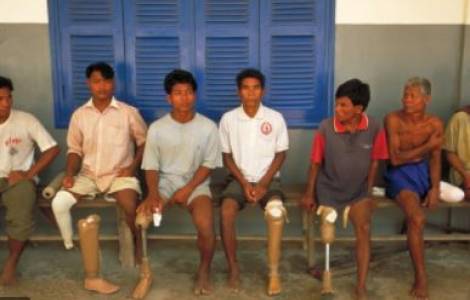 Bangkok (Agenzia Fides) – During the period from mid-2019 to October 2020, the Burmese army and various "non-state armed groups" used mines in four Asian countries: Afghanistan, India, Pakistan and Myanmar. Eight out of ten victims are civilians and four out of eight are children. This is what the 22nd edition of the "Landmine Report" indicates, the report of the International Campaign to Ban Landmines-ICBL on the progress of the struggle to free the planet from one of the most insidious, resistant and deadly weapons invented by man. Asia, the document recalls, as a whole is the continent where there are more countries that have not signed and ratified the Mine Ban Treaty adopted 23 years ago.
The Landmine Monitor Report 2020 notes that while countries are collectively striving to make progress to achieve a mine-free world even during the Covid-19 pandemic, there are new dangerous threats from the use of improvised explosives by groups non-state armed forces as civilian incidents increase. The international campaign also records a general decrease in support for financial action for demining. Progress is therefore limited. Currently, 164 countries are bound by the Mine Ban Treaty: this is 80% of the countries in the world and the 33 countries that remain outside continue to act in compliance with the international normative frame work.
In terms of progress, the vast destruction of stockpiles of these indiscriminate bombs continues to be one of the Treaty’s greatest successes. The States that ratified it destroyed over 55 million anti-personnel mines present in their arsenals, including more than 269,000 mines destroyed in 2019. During the period taken into consideration, at least 156km² of land was reported cleared of landmines and more than 123,000 antipersonnel mines were cleared and destroyed and Chile, at the beginning of 2020, declared it had completed the cleanup operations. 2019 represented the fifth consecutive year with a high number of landmine and war r casualties due to armed conflict with large-scale use of improvised explosives.
According to the Landmine Monitor 2020, about 5,554 mine accidents were recorded, more than half of which were caused by improvised mines (2,949). Civilians still represent the majority of people involved in these accidents and represent 80% of the total. Half of them are children.
The report regrets that 2019 was characterized by a reduction in funding dedicated to demining operations in general, with 45 donors and contaminated countries contributing around US $ 650 million: 7% less than in 2018. Sixty states and other areas are contaminated by antipersonnel mines as of October 2020. This includes 33 States Parties to the Mine Ban Treaty, 22 states not party, and five other areas. The report also warns that the coronavirus pandemic has resulted in a restriction in access to services for survivors and disabled people as well as in the exercise of their rights.
Asia, China, India, Laos, Micronesia, Mongolia, Myanmar, Nepal, Pakistan, Singapore, Tonga and Vietnam have not signed the Treaty. Central Asia and the Caucasus, Armenia, Azerbaijan, Georgia, Kazakhstan, Kyrgyzstan, Uzbekistan and Russia are not signatories. The Middle East and North Africa: Saudi Arabia, Bahrain, Egypt, the Emirates (Eau), Iran, Israel, Lebanon, Libya and Morocco. Instead, all European and African countries have signed and ratified the Treaty. In the Americas, Cuba and the United States remain outside. (MG-PA) (Agenzia Fides, 21/11/2020)

ASIA/MIDDLE EAST - The Middle East Council of Churches invites to join in the consecration of the region to the Holy Family: our land "attracts" wars, let’s ask the Savior for help

AMERICA/COLOMBIA - Violence in Arauca even at Easter: four people killed, including two children