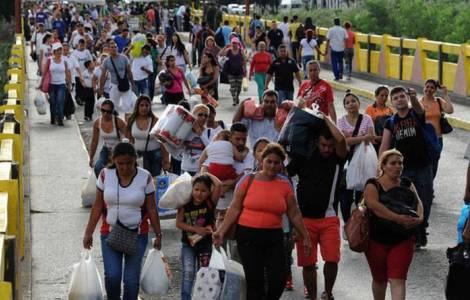 2020-11-19
Lay people active at the service of life and justice: national week of the laity

2020-11-17
Solidarity with Venezuelan migrants: reasons, suffering and proposals in a report by RED CLAMOR, UNHCR and CELAM

San Paolo (Agenzia Fides) - "Let’s overcome the barrier of indifference, let’s create awareness of the precious contribution that Venezuelan refugees and migrants give to the Country that welcomes them. Let us learn to break down the walls that separate us and create bridges of encounter to enrich each other". This was underlined by the president of Red Clamor, Archbishop Gustavo Rodríguez of Yucatán-México, in his presentation of the report made by Red Clamor with the support of United Nations Refugee Agency, UNHCR, and the Latin American Episcopal Council (CELAM) on refugees and migrants from Venezuela who arrived in various Latin American countries to escape the serious situation in their country.
As reported in the note sent to Agenzia Fides, the report wants to share the testimonies of Venezuelan refugees and migrants, making visible their feelings, the challenges they had to face and the strength with which they overcome all kinds of difficulties. The report also offers a number of recommendations aimed at promoting the protection and global development of refugees and migrants in their host communities.
More than 200 testimonies were collected that cite common challenges such as xenophobia and discrimination, the obstacles to having their rights respected and accessing social integration, as well as the many difficulties encountered in the world of work. Furthermore, the Covid-19 pandemic exposes them to even greater difficulties and risks, since many have lost their sources of income and, at times, even their homes, making them potential victims of poverty, forced eviction, exploitation, violence and abuse of all kinds, among other phenomena.
The report is divided into four chapters: the first analyzes the reasons for emigrating from Venezuela (political and generalized violence, security reasons, health problems, nutrition, education); the second takes into consideration the transit routes, with the risks of xenophobia, discrimination and violence; the third presents the support and reception network in the various cities; the fourth mentions the challenges to be faced such as xenophobia, violence, respect for rights.
Following the investigation, a series of recommendations are formulated, first of all the need to achieve greater synergy between organizations of the Catholic Church, the United Nations agencies and other national and international realities, so that together they promote the integral development of refugees and migrants. Furthermore, to put pressure on States so that they go beyond migration policies that consider migrants and refugees "a danger to security" and that they respect their rights and promote their integration; to continue to work with the public services of different countries to make them aware of welcoming Venezuelan migrants; to ensure better support towards people at higher risk (the elderly, children, single women, the sick ...); to step up efforts to study the labor market in reception centers to avoid saturation. (SL) (Agenzia Fides, 17/11/2020)

EUROPE/ITALY - Scalabrinians: the Covid emergency does not stop the tragedies in the Mediterranean

ASIA - Abuses of human rights, xenophobia and religious intolerance in Asia: the denunciation of "Franciscan International"

ASIA/PAKISTAN - Dowry prohibition: a burden has been removed from the shoulders of the poor