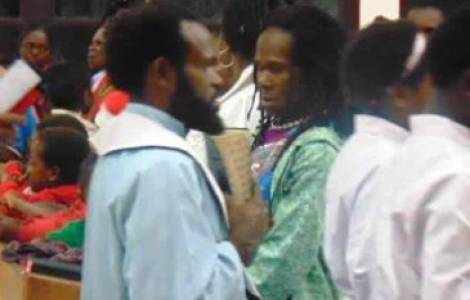 Jayapura (Agenzia Fides) - "Human rights violations in Papua should be stopped immediately, in particular by members of the Indonesian security forces and an independent and credible investigation in the cases of the murder of the Catholic catechist Rufinus Tigau and of Meinus Bagubau must be conducted without delay, involving the National Commission for Human Rights and Church leaders, in order to bring those responsible to justice": this is what is requested in a document sent to Agenzia Fides by four organizations of the Church in Indonesian Papua, namely the Justice and Peace Commission of the Diocese of Timika (SKP Timika); the Justice and Peace Commission of the Archdiocese of Merauke (SKP Kame); the "Justice, Peace and Integrity of Creation" of Franciscans of Papua (SKPKC Fransiskan Papua); the "Justice, Peace and Integrity of Creation" of the Augustinians, in the Vicariate Cristus Totus, in Papua (SKPKC OSA Papua); Furthermore, the international NGO, accredited to the UN, "Franciscans International" (FI) took sides and offered its contribution.
This is a very detailed and documented report, the result of research work by Catholic organizations, on a case of murder that took place in the easternmost region of Indonesia and on the case of the injury inflicted on a minor, which took place on the same day. As reported to Agenzia Fides, the case is still awaiting a conclusion that does justice to the victims and families. In the report titled "Extrajudicial killing of Mr Rufinus Tigau" reconstructs the two cases of Rufinus Tigau and Meinus Bagubau, which date back to October 26, 2020. Rufinus Tigau a 28-year-old indeigenous Papuan and Catholic catechist from the diocese of Timika (in the province of Papua) , was shot dead and killed by members of a joint operation between the Indonesian army and police in Kampung Jibaguge (in the district of Sugapa, of the Intan Jaya Regency in Papua). 12-year-old Meinus Bagubau was also shot on the same day.
The report reconstructs the phases of the incident of October 26, of which a broad background is provided: "Since December 2019, a joint operation between the Indonesian army (Tni) and police (Polri) has been carried out in the Intan Jaya Regency area, as part of efforts to fight a Papuan independence movement known as Tentara Pembebasan Nasional Papua Barat (West Papua National Liberation Army - TPN-PB). Various shootings took place which caused victims on both sides, as well as deaths among civilians living in the area". Already after the killing of the Protestant presbyter Yeremia Zarambani on 19 September 2020, the report further explains, "the Indonesian National Commission for Human Rights (Komnas Ham) had released a public statement on the violence in the Intan Jaya Regency", documenting at least 18 cases of violence involving civilian victims and security personnel. Furthermore, the report recalls that, in addition to well-known episodes, "this year there have also been several accidents in the mining area of PT Freeport Indonesia", in particular in the Grasberg mine, in the Timika region, Papua, and that "on two occasions, indigenous Papuans were mistakenly identified as members of the TPN-PB and shot by members of the Indonesian military and security forces" while the guerrillas executed a worker.
Thus we come to reconstruct the tragic case of October 26 when Rufinus Tigau approaches the security forces who surrounded the area where he lives, and continue to shoot. Rufinus only wants explanations and seeks a gesture of conciliation. The report notes: "Tigau approached the security members and said, 'Please stop shooting. We must speak calmly. What is the problem?' A member of the police pointed a gun at him who immediately raised his hands in submission. However, he was killed on the spot", cold-bloodedly. As part of the continuing shooting, Meinus Bagubau was also shot. The military denies the existence of an incident, accusing R. Tigau of being a member of the armed criminal separatist group (Kelompok Kriminal Separatis Bersenjata - Kksb), a term used to indicate one belongs to the TPN-PB. "However - writes the dossier - the assertion that Tigau was a member of the TPN-PB was rejected by Father Martin Kuayo, Administrator of the Catholic diocese of Timika, Papua, who confirmed that Rufinus Tigaus was a peaceful catechist of his own diocese".
Catholic organizations denounce another episode of violence that took place in the previous days: that of Agustinus Duwitau, a Catholic catechist in the village of Emondi, district of Sugapa, wounded by gunshot on 7 October 2020 while he was returning home. According to local sources, he too was hit because suspected of being a member of the TPN-PB.
The Intan Jaya Regency is the region where the Wabu Block is located, part of the Papuan mining concession granted by the Indonesian government to the PT Freeport company (which later becomes PT Freeport Indonesia, as the Indonesian government increased its shares in the company). In July 2015, an agreement was signed between the government and PT Freeport Indonesia to return the gold-rich Wabu bloc to the government. Human rights organizations and churches have repeatedly warned the government of human rights violations in the Intan Jaya Regency. Several years ago, the plan to extract the area's gold reserves was rejected by the inhabitants living in the area for fear of serious environmental damage to the indigenous communities who reside there.
Papua (or Irian Jaya) is the Indonesian province that occupies the western part of the island of New Guinea. For decades, the local population has complained of discrimination and abuse perpetrated by Indonesian authorities and police. The province, a former Dutch colony, was annexed by Indonesia in 1969 following a controversial referendum. Indigenous Papuans constitute about half of the population, which claims political independence and has for years called for a new referendum even though, in 2002, the government in Jakarta granted the region special autonomy status. (MG-PA) (Agenzia Fides, 11/11/2020)