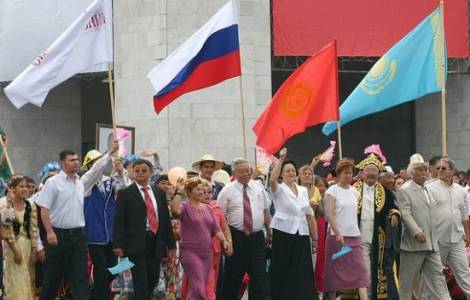 Almaty (Agenzia Fides) - There is a cultural, social and economic political component, that is a common characteristic in the Central Asian countries: Kazakhstan, Uzbekistan, Turkmenistan, Kyrgyzstan and Tajikistan, the five so-called "stan" republics, are still too young as countries of the former Soviet Union and indeed show traces of democracy poorly defined in their genetic code. Fr Edoardo Canetta, who lived as a missionary in Kazakhstan for twenty years, five of them as Vicar General of Central Asia, and today teaches at the Ambrosian Academy in Milan.
"In each of these five countries there are hardly any political traditions and traditional parties: this is inevitable after 70 years of communist regime. In this part of the world, moreover, power is also linked to a local dynamic: there are still ethnic and clan divisions that are not always declared, but are very serious and affect political decisions. For this reason, street demonstrations are not necessarily proof of democracy", he explained, referring in particular to the Kyrgyz crisis of recent weeks. "During my visits to these countries as Vicar General, I found that the political reality of these countries, despite attempts to get closer to Western standards, is still shaped by the dynamism of their nomadic heritage. In the past, people only moved, when a leader left, whom they could follow, but when that leader didi not enjoy popular consent, they would not go anywhere. It is what I have often called 'front-wheel drive democracy', that is characterized by rather authoritarian political leaders. But the leaders have no future without the support of the people", explains Fr. Canetta.
In autumn 2020, the citizens of Kyrgyzstan and Tajikistan were called to vote - in the first case it was a parliamentary election, in the second case a presidential election - which led to two apparently diametrically opposed scenarios. On the one hand, in the hours after the election in Bishkek, the capital of the Central Asian country, the Kyrgyz people took to the streets to call for the cancellation of the election in which pro-Russian Sooronbay Jeenbekov was the winner. The crisis, also known as the "third Kyrgyz revolution", was resolved only two weeks later with the rise to power of Sadyr Japarov, a controversial figure, linked to criminal clans who de facto centralized power, and thus in some ways betrayed the intentions of a democratic revolution. On the other hand, Emomali Rahmon was elected President of Tajikistan for the sixth time, with more than 90% of the vote: this means that power in the Central Asian country has been in the same hands for 28 years and that, if Rahmon were to complete his mandate, the period would be extended to 35 years. In this case, the election result did not lead to protests that were even vaguely comparable to those of the Belarusian people against Aljaksandr Lukašėnka, or even those of the Kyrgyz neighbors. If Kyrgyzstan, as researcher Davide Cancarini told Fides, has at least a democratic appearance and the population rebels against decisions that they consider to be unjust, this does not happen in Tajikistan. Together with Turkmenistan, it is the most authoritarian country in Central Asia and according to observers one of the most authoritarian in the world.
The five Central Asian republics, which only became independent from the Soviet Union in 1991, have before them a path towards the realization of democracy that is still rather uncertain and that often, as the scholar and researcher Davide Cancarini explains to Fides, is shaped more by economic than political criteria: "A model based on 'authoritarian openings' and which - even if the comparison seems risky - vaguely reminds of the Chinese example". In particular, says the researcher, Uzbekistan seems to be a pioneer in this sense: "After the death of the authoritarian President Islom Karimov, his successor Shavkat Mirzayev seems to listen more to the needs of citizens, but it cannot be said that he is opening up from a democratic point of view. What Mirzayev is trying to do is open up the country economically in order to encourage the influx of foreign investment and the emrgence of a local business community, also because he is aware that in Uzbekistan, a country of 32 million inhabitants, including many young people that unemployment can become a social problem ready to explode".
With the resignation of Nursultan Nazarbayev, who has ruled the country since 1990, Kazakhstan seemed to have taken a step towards democracy last year. According to Davide Cancarini, however, the reality has turned out to be very different: "Nazarbayev's model is not a virtuous example: he stepped back and advocated the rise of Tokayev, one of his men, to power, which did not change the situation significantly. Protests broke out in Kazakhstan because many Kazakh citizens, who had been waiting for Nazarbayev's resignation, tried to take advantage of the moment, but the hoped-for democratic openings did not take place. Tokayev is following in the footsteps of Nazarbayev, who some believe he is still pulling the strings in the background". (LF-PA) (Agenzia Fides, 10/11/2020)