ASIA/MYANMAR - Peaceful elections: towards a consolidation of the National League for Democracy 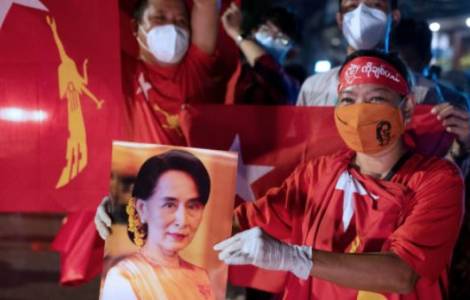 2020-12-18
The Bishop of the Burmese territory with the highest Christians presence dies: A Pastor dedicated to listening and dialogue

Yangon (Agenzia Fides) - The results of the Burmese elections which were held on Sunday 8 November in the Asian country, in the first round of elections held under the aegis of a civil government, are reconfirming the political consolidation that the National League for Democracy (NLD ) of leader Aung San Suu Kyi had in the first democratic vote in 2015. The Nobel Peace Prize winner was re-elected to the lower house in the Kawhmu Township seat in Yangon, the former capital, where more than 5 million people cast their vote. As in the last election, the turnout was very high, even if no official data are available yet. There were long queues in front of the polling stations which had been open since the early morning hours and closed at 4 pm. Reports in the local press and initial polls indicate a clear preference among citizens for the
League.
The elections were held in a peaceful atmosphere and the Electoral Commission expressed its satisfaction with the way the election day went, despite the security protocols to contain the corona epidemic. Nevertheless, about one million people were unable to vote in the areas where the armed conflict between the Burmese army and the Arakan Army, an autonomous local armed group took place: in Rakhine, the north-western state where the Electoral Commission decided to close 9 of the 17 constituencies for security reasons. The Arakanese parties felt deprived of representation, the same complaint for at least one million Rohingya, the vast Muslim minority of Rakhine, who now live abroad where they fled especially after the anti-Muslim massacres of 2012 and 2017. About 700,000 displaced people sought refuge in Bangladesh. However, they were not eligible to vote in Myanmar even before they fled.
A new victory for the League, despite many shadows, would mean a consolidation of the democratic process and guarantee the resumption of a very complex path towards democratization: in the first months of this year, the League had tried to change the Constitution which, precisely in electoral matters, remains extremely favorable to military power. The Charter, in fact, guarantees a quarter of the parliamentary seats to soldiers chosen by the Commander in Chief of the Defense Services: in Pyithu Hluttaw - the lower house - only 330 of the 440 seats were elected by the people on November 8, while the remaining 110 seats are reserved for the army. Likewise, 56 of the total of 224 seats in the Amyotha Hluttaw (House of Nationalities or House of Lords) are occupied by the military. In addition, on the basis of the constitution, which was commissioned by the military and passed in a referendum in 2008, the military receives the ministries of home affairs, defense and border protection. (MG-PA) (Agenzia Fides, 9/11/2020)

OCEANIA/AUSTRALIA - The help of the Church to Rohingya refugees, between Covid-19 and natural disasters