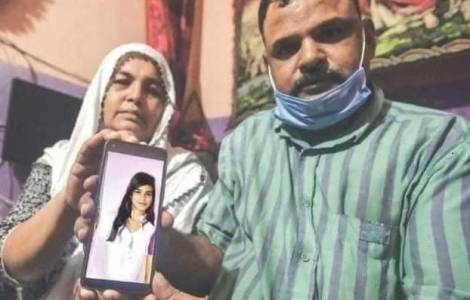 Karachi (Agenzia Fides) - "We are grateful to God that, on orders from the Provincial Supreme Court, the Sindh Police rescued 13-year-old Catholic Arzoo Raja, who was kidnapped on October 13th, 2020. It is a great result after two weeks of ongoing commitment from Church leaders, with the support of leaders of political parties, activists and organizations for human rights and civil society. I express my appreciation to police officers and I also thank all our Muslim brothers who help us ask for justice for Arzoo", said the Vicar General of the Archdiocese of Karachi, Mgr. Diego Saleh, speaking to Agenzia Fides after having met the Catholic minor who was released yesterday, November 2.
Mgr. Saleh continues: "I greatly appreciate the work of the security forces for rescuing the minor on the same day the High Court gave the order, and for having kept the minor in custody at the police station in the women and children section". The Vicar General adds: "The entire Pakistani Christian community is grateful to the Sindh government, the High Court judges and security officials for their swift response to the court orders enacted yesterday morning to save Arzoo". He therefore urges "the entire Christian community to continue to pray until we obtain justice for Arzoo, and I hope we will get it soon".
The police meanwhile arrested the kidnapper Ali Azhar, who had kidnapped the girl on 13 October morning, had forced her to marry and convert to Islam on the same day (see Fides, 21, 22, 24, 29, 30/10/2020).
Speaking to Fides, Anthony Naveed, a Christian member of the Provincial Assembly of Sindh and head of the joint Commission of the Catholic and Protestant Church created to deal with Arzoo Raja’s case, says: "We are grateful to Bilawal Zardari, President of the Pakistan Peoples Party and to the Government of Sindh grateful for their help in enforcing the existing law in Sindh Province that does not allow marriages under the age of 18". He adds: "In the previous petition filed in court on October 27, 2020, Arzoo Fatima (Muslim name of Arzoo Raja) asked for the protection of her marriage, but basic details were withheld and it was not communicated that she was under 18 years of age.
Therefore, the decision was initially made in her favor and allegedly for her protection". Anthony Naveed further explains: "The following petition, which we filed with the family, contains all the authentic documents proving that Arzoo is a minor and was forced to marry her kidnapper, which is why the court ordered Arzoo to be released immediately from the hands of her kidnapper Ali Azhar".
Fr. James Channan, OP, Director of the Peace Center in Lahore, speaking to Fides, commented: "The release of Arzoo is an occasion to thank God for the common struggle of Christian religious leaders, human rights activists, promoters of justice and of inter-religious harmony which produced this positive result. The prayers of countless Christians and many Muslim men and women were answered".
James Channan further observes: "It is a victory for law and justice that we can win in Pakistan if we are treated justly and seriously. The kidnapping, forced conversion and forced marriage to Azhar Ali, a 44-year-old evil person, was a severe blow and a challenge to our judicial and political system". Fr. Channan concludes: "Arzoo's release in such a short space of time is a sign of success for the common struggle, prayers, peaceful demonstrations and protests of the Christian community". (AG) (Agenzia Fides, 3/11/2020)