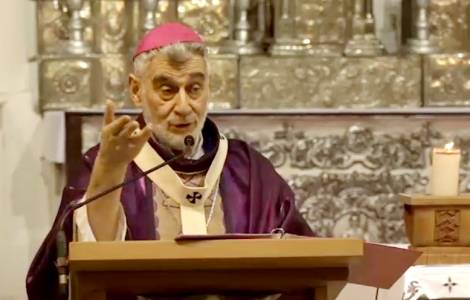 2022-01-07
Caritas Bolivia will continue to help migrants at the borders with Peru, Chile and Argentina in 2022

2021-12-15
The bishops: contemplating the family of Bethlehem, every home becomes a school of growth and positive experiences

Santa Cruz (Agenzia Fides) - "On this day when we remember all the believers who have died, pain and memories, questions and doubts mingle in our hearts, especially in these tragic times of the global corona epidemic that has suddenly taken away so many brothers and sisters. However, as Christians, we must only allow ourselves to be overwhelmed by these deeply human feelings, but we must look with the eyes of faith to the mystery of life and of 'our dead sister', as St. Francis called it. Sister death because it opens the door to eternal life that awaits in the risen Christ for those who believed in him and believes in him", said the Archbishop of Santa Cruz, Mgr. Sergio Gualberti, in his homily during the Eucharistic concelebration which he presided yesterday, November 2, on the day of the commemoration of all those who died, in the Basilica of St. Lawrence martyr.
"The Eucharistic Supper of the Word and the Bread of Life highlights the central elements of the mystery of the Resurrection: life, communion and gratitude, hope", explained the Archbishop, who continued: "The Eucharist is gratitude, our best way to thank the Lord for the people who gave us life and for those who introduced us to the life of faith. In addition to our brothers and sisters, today we especially remember all the priests who gave their lives to the Gospel and to the pilgrim Church in Santa Cruz, such as Fr. Jorge Robles, José Bialasik and Fr. Ignacio Roca, victims of Covid-19, and Archbishop Mgr. Luís Rodríguez, as well as our beloved Cardinal Julio Terrazas".
In his homily, the Archbishop recalled that in this historical moment mankind seemed to have achieved the goals from a scientific and technical point of view, instead "we are in a society of death and powerless in the face to an invisible virus. To a greater extent, death has been man-made: wars, terrorism, totalitarianism, conflicts, poverty, hunger, pollution and the destruction of biodiversity", said the Archbishop, who then recalled the feast of All Saints' Day, which celebrates "the immense multitude, which no one can count ... who washed their clothes in the blood of the Lamb", which "opens us to the hope that, thanks to the blood of Christ on the cross, one day we will share with our deceased brothers and sisters the joy of being together in the presence of God". (SL) (Agenzia Fides, 3/11/2020)

AFRICA/MALAWI - The Bishops: "Staff of the Anti-Corruption Bureau must be protected"

AMERICA/DOMINICAN REP. - The Bishops: "St. Joseph supports us in our daily struggles, no one like him knew how to go through difficult times"