AFRICA/NIGERIA - Archbishop of Lagos warns of provocations on social media 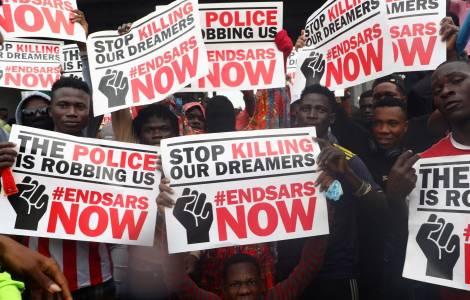 Abuja (Agenzia Fides) - "For days we have witnessed a series of provocations online and through social networks of people who want to stir up the fire of ethnic and religious divisions to cause confusion and chaos. There are videos inviting the Igbo ethnic group to leave the southwestern regions of Nigeria within 48 hours, others in which there is talk of an ecumenical center set on fire or a mosque attacked by extremists. All this news is absurd or at least unconfirmed, but it is enough for it to circulate on the net to create further chaos, which my country, in this delicate moment, does not really need. For this reason, as Archdiocese of Lagos, I have decided to intervene actively and raise the alarm", explains Mgr. Alfred Adewale Martins, Archbishop of Lagos, to Agenzia Fides, who in a press release condemned the attempts made in recent weeks to fuel the inter-ethnic and interreligious tensions that aim to stir the minds and push towards confrontation.
"We are very concerned about this confusing situation which complicates the path towards a new Nigeria. The Archdiocese of Lagos condemns this divisive message and turns to young people so that they do not allow hatred to prevail, especially at this time". The intervention of the Church in the commercial capital of Nigeria comes at a particularly delicate period for the city and the whole country.
Police response and violence during the demonstrations in Lagos and across the country, with mostly young people demanding reform of the security forces and radical reforms in the country, culminated in shootings in which several demonstrators were injured on October 20, according to Amnesty International at least 12 people died.
"For many years, people have complained about the behaviour of the special police units", explains the Archbishop. "Brutality, excesses, injuries and even murders, as well as widespread corruption are criticized. In recent weeks, many young people have taken to the streets to protest against violence and to demand reforms. The demonstrations were organized in great detail and the young people were initially very peaceful…They turned to the government with precise demands, which initially they promised to respond.
However, since there was no immediate government, the protests continued until October 20, the day the army intervened and fired. It is important to distinguish peaceful protests from acts of violence and looting that followed. Indeed, the demonstrations had been organized to say no to violence. Now the clashes have stopped (a 24-hour curfew was proclaimed on October 21, ed) and so have the protests. But the government cannot ignore what happened, especially the injured who are being treated in the hospitals", he concludes. (L.A.) (Agenzia Fides, 31/10/2020)