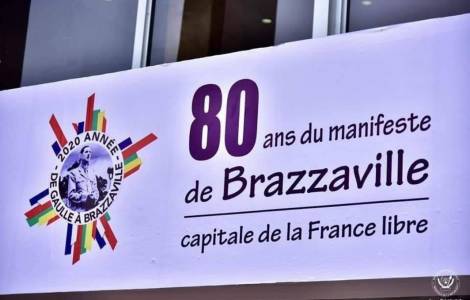 2020-06-15
Bishops: "The health crisis becomes an opportunity for conversion"

2020-06-01
Erection of the Ecclesiastical Province of Pointe-Noire, and appointment of first metropolitan Archbishop

Brazzaville (Agenzia Fides) - On October 26, the Basilica of Sant'Anna in Congo hosted the Mass for the launch of the celebrations for the 80th anniversary of the "Declaration of Brazzaville-Capital of Free France". The Mass, for peace in the Congo and in Africa, was celebrated by His Exc. Mgr Anatole Milandou, Archbishop of Brazzaville and concelebrated by the Apostolic Nuncio, His Exc. Archbishop Francisco Gerardo Escalante Molina, by H. Em. Cardinal Fridolin Ambongo, Archbishop of Kinshasa, accompanied by H. Em. Cardinal Laurent Mossengwo, Archbishop Emeritus of the same city, as well as by Archbishops and Bishops of the Congo and those who came from the ACERAC sub-region (Central African Republic, Cameroon, Chad and Equatorial Guinea). Various administrative, political-military authorities and lay faithful, for the most part responsible for apostolate movements, fraternities, prayer groups, participated in this Mass.
In his homily, Mgr. Victor Abagna-Mossa, Archbishop of Owando said that "celebrating the 80th anniversary of the Declaration of Brazzaville-Capital of Free France, consists in recalling the exceptional place that the capital of Congo had at the time when France threatened in its existence united for its freedom. It also comes down to Brazzaville’s desire to show that the breath of freedom that originated in Africa is a universal good".
Archbishop Abagna-Mossa then continued: "since the 1960s, we have become independent, free. What do these terms of freedom and independence mean to us! Has Brazzaville la Verte, the capital of free France, remained free? For me, African countries are not independent, at least Congo. Indeed, in a country that has wood, oil, iron, manganese, gold and more, why don't we use all these riches for the benefit of every citizen? And sometimes we are the evil: our selfishness, our thirst for enrichment", concluded the Archbishop, inviting every Congolese to work for the good of the country.
For his part, Cardinal Fridolin Ambongo invited Africans not to lose the spirit of the Brazzaville manifesto, because it signifies the rejection of any humiliation or enslavement by individuals or groups of other countries.
After the Nazi invasion of France, General Charles De Gaulle, on 24 October 1940, arrived in Brazzaville making it the capital of Free French Africa and of all Free France. On 27 October 1940, General de Gaulle published the Brazzaville Manifesto in which he reaffirmed the will of Free France to continue fighting Nazism by resorting to the resources of French Equatorial Africa. Subsequently, from Brazzaville, the authorities of Free France, recognizing the contribution of African troops to the war against Nazism, will lay the foundations for the decolonization of their African colonies. (S.M.) (Agenzia Fides, 28/10/2020)