AMERICA/ECUADOR - Testimony of a missionary, "True happiness is found only in God" 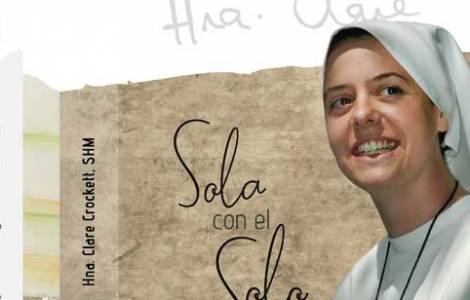 2021-02-20
Bishops to the authorities: the most vulnerable people must receive the vaccine first

2021-02-10
The elections show a country divided in two, the Bishops call for peace and fraternity

2021-01-09
The Bishops: "With our vote we write history and generate progress or regression, security or insecurity"

2020-12-04
The Bishops: "Our dreams for Ecuador and for the pilgrim Church in these lands"

Quito (Agenzia Fides) - "Her overflowing joy has led many souls, especially young people, to discover that true happiness is found only in God. The coherence of her life and her total dedication to the various apostolates carried out in Spain, the United States and Ecuador succeeded in effectively transmitting the message that only God can satisfy the heart of man when one gives himself completely to Him, without denying him anything". These are the fundamental features of the testimony of Sr. Clare Crockett, of the Siervas del Hogar de la Madre (SHM), a young Irish missionary, who had been in Ecuador for 15 years, when a violent earthquake hit the coast of the country on the night of April 16, 2016. The earthquake caused hundreds of deaths and thousands of injured. Among the victims there was Sister Clare and five postulants from her community of Playa Prieta, where the nuns ran a school that was completely destroyed (see Fides, 18/4/2016).
On 8 September, the feast of the Nativity of the Virgin Mary, Sister Clare would have celebrated the tenth anniversary of her perpetual vows. For the occasion, the EUK Mamie Foundation published its first biography book in English, later presented also in Spanish, entitled: "Sister Clare Crockett: Alone with Christ Alone", "Hna. Clare Crockett: Sola con el Solo" and was written by Sister Kristen Gardner, SHM.
Young Clare Crockett, whose highest aspiration was - no more, no less - to walk the red carpet in Hollywood, put all her dreams aside on Good Friday after a lonely encounter with the Crucified Christ. At 17, the Lord transformed her soul and wanted nothing more than to have Christ as her only love. This desire of her soul to belong only to the Lord, to live alone with "the Alone", led her to dedicate herself in the Siervas del Hogar de la Madre, a vocation to which she gave herself with total generosity. Sister Kristen Gardner points out in the introduction: "This book is far from being a complete biography. Only four years have passed since the death of Sister Clare and there are still many, many testimonies to be collected. However, I hope this book will enable allwho have heard of her death and seen the documentary 'All or Nothing' to get to know her better. Those who knew her personally will learn a lot about Sister Clare". The book can be purchased on Amazon. (SL) (Agenzia Fides, 28/10/2020)

AFRICA/ZAMBIA - Zambia and Zimbabwe hit hard by Covid-19; the Bishops: "let's put aside divisions and unite in the struggle"