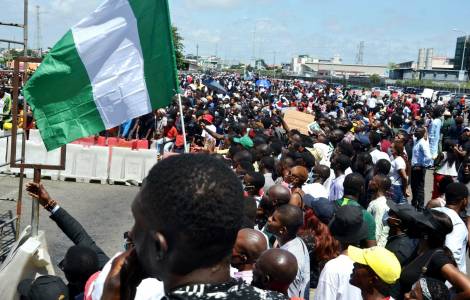 2021-09-02
73 school pupils kidnapped; the Bishops: "Too many kidnappings of children. We risk a traumatized generation of young people"

2021-07-07
Resignation and appointment of bishop of Abakaliki

Abuja (Agenzia Fides) - "Young people are tired of the brutality and injustices perpetrated by members of SARS and, more generally, the police forces", say the Bishops of Nigeria in a statement, expressing their support for the protests of young people against the violence of the police and aimed at demanding more social justice (see Fides, 21/10/2020).
The Bishops, however, invite the demonstrators to remain within the boundaries of peaceful protest and not to give in to provocations: "We support young people who protest and we warn that they are authorized to exercise their right to peaceful demonstrations without any intimidation, but they must not give in to provocations or to incitement to violence".
The Redemptorist missionaries, who have many missions in Nigeria, also sent a message to the Nigerian faithful signed by Fr. Michael Brehl, the Superior General of the Congregation, in which they affirm that "they cannot be silent in the face of this injustice and violence. These events cry out to God for justice and hope. As we accompany the young people of Nigeria and their families, we pray that through peaceful and non-violent protest a real change is possible", says the message sent to Fides.
After yesterday's Angelus, Sunday October 25, Pope Francis expressed his concern for the situation in Nigeria: " I am following with particular concern the news coming from Nigeria, regarding the violent clashes that have recently occurred between law enforcement and several young protesters. Let us pray to the Lord that any form of violence may always be avoided, in the constant search for social harmony through the promotion of justice and the common good. The protests began on October 7, after the extrajudicial killing of another Nigerian youth by the special armed robbery unit (SARS), which was caught on video and quickly went viral on Nigerian socithe subject of a video that quickly went viral on Nigerian social networks. The SARS police unit has become famous for illegal arrests, torture, extortion, sexual violence and killing of young Nigerians. The unit is alleged to operating secret torture camps and detention facilities.
Protesters using the hashtag #EndSARS took to the streets, demanding that the special unit be disbanded and the police reformed, but also that those responsible for the summary executions of unarmed Nigerians be prosecuted and that the families of the victims be compensated. However, protesters' demands quickly widened to broad criticism of government corruption, incompetence and impunity as human rights violations continue and economic malaise reigns in Nigeria.
Lagos, a city of over 20 million people, the largest in Africa and the commercial heart of Nigeria, quickly became the epicenter of the protests, but protesters occupied major cities across the country. Government buildings, airport entrances, main roads and bridges have been closed. (L.M.) (Agenzia Fides, 26/10/2020)