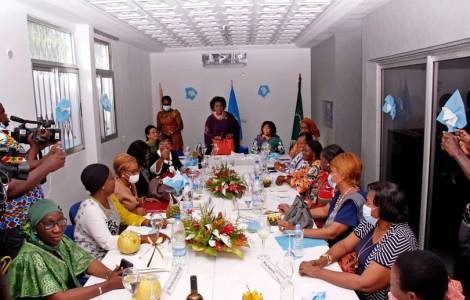 Abidjan (Agenzia Fides) - A few days before the presidential elections in Ivory Coast, on October 31, when the tensions in the Country are becoming increasingly felt, UN-Women, the United Nations Entity for Gender Equality and the empowerment of women, invited on October 21 at its headquarters in Abidjan Cocody, the women of the ruling party and the women of the opposition to a working lunch: Objective: to come together to dialogue for the peaceful elections with the support of femwise, mediators of the African Union.
"Women of all political tendencies in Ivory Coast have decided to meet to discuss the situation because we have seen that in this delicate process, women must play their part", said Célestine Zanou, head of delegation of the UN-Women mission. For her, what should be remembered "is that women are aware that it is through dialogue and consultation that we overcome trials and agree that dialogue is therefore a necessity for the elections to be peaceful".
The meeting, which lasted just over two hours, was attended by the women leaders of various political parties in the Ivory Coast including Kandia Camara, general secretary of the RHDP, Marie Odette Lorougnon of the FPI, Léopoldine Coffie, vice president of the PDCI-Rda , Danielle Boni Claverie of the Republican Union for Democracy. They all expressed their support for joining their efforts in order to contribute to the strengthening of dialogue so that the elections are held without violence in the Country.
Minister Euphrasie Yao Kouassi, a member of civil society and peace mediator, welcomed the successful holding of the meeting focused on dialogue, social cohesion with a view to peace and above all a peaceful climate for these upcoming elections which was enhanced by the presence of several women political leaders from West Africa including former Minister Diyé Ba from Mauritania, Marie-Louise Baricako from Burundi, member of the Femwise network and Marie Madeleine Kalala from the Democratic Republic of Congo. The delegation was led by Célestine Zanou, a former candidate for the presidency of Benin.
"For me it is a great day", says Euphrasie Yao Kouassi who recalls that "with the United Nations resolution 13-25 on women, peace and security, the Ivory Coast was the first African Country in 2006 to elaborate a action plan based on this resolution". A starting point for the Ivorian women to help the Country overcome ethnic and religious divisions, making the Country united and peaceful. (S.S.) (L.M.) (Agenzia Fides, 24/10/2020)