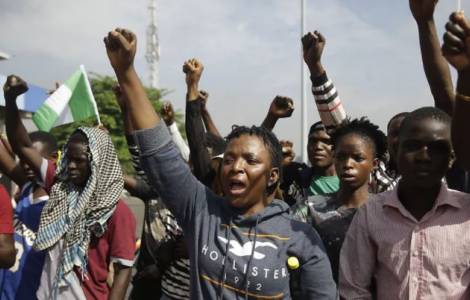 2021-04-20
"We need to promote responsible use of social media, especially among young people"

Lagos (Agenzia Fides) - It is poverty that drives Nigerians to protest, not just outrage at police violence. Young people overwhelmed by misery and frustrated by unemployment take to the streets to protest and demand economic reforms. This is the analysis of Father Mark Ezeh, OFM Cap, a Nigerian Capuchin friar.
"Nigeria - he observes - is a very rich country. We have land, natural resources, a young and enterprising population. Unfortunately, politics is unable to manage this immense wealth properly. And, above all, to use it for the common good. So poverty is very widespread and people feel it firsthand".
Nigeria is a nation full of contradictions. Despite being one of the world's largest producers of hydrocarbons, it has only four (often malfunctioning) refineries and is forced to import gasoline. In many parts of the country, electricity is not supplied regularly. The health system is poor. "When they get sick - continues Father Marc -, wealthy people seek treatment abroad. The poor are forced to stay at home without assistance, care and medicine". Corruption is widespread: Nigeria ranks 146th (out of 198) in the corruption ranking prepared by the NGO Transparency International. Young people with a school or università degree cannot find work.
"Faced with this situation - continues the religious -, people are taking to the streets. For two weeks, cities have been in turmoil. The government responded by sending the police and the armed forces to the streets. Several victims have already registered in the clashes in Lagos, the country's commercial capital. For this reason, the protest against the police has increased". The protests concern the Special Anti-Robbery Squad (SARS), a special police unit that had to fight against violent robberies, but was instead responsible for criminal actions against the same population (see Fides, 13/10/2020). The government decided to disband SARS, but on 13 October, the police chief in Nigeria announced the formation of a new police unit, the Special Weapons and Tactics (SWAT), to take over the tasks that had been entrusted to SARS. According to the population, however, this is only a "renaming" of the old special unit (see Fides, 21/10/2020).
A curfew has been imposed in many States of the federation. "People took to the streets only to show their discontent, concludes the Capuchin friar. The reaction of the police and law enforcement officers led to violence. Now the protesters are afraid, but not intimidated. The ban does not affect them. They sleep on the street. They keep demonstrating and no one can stop them. Major reforms are urgently needed not only for the military and police, but also in the economy. People are fed up". (EC) (Agenzia Fides, 22/10/2020)