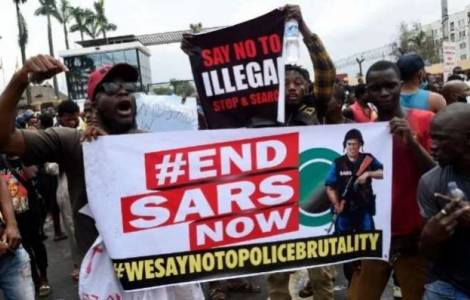 2021-06-11
The Bishops: "The Constitution should be reformed so that there is a single law that is the same for all"

2021-06-04
Fr. Joe Keke, kidnapped with the priest who was later found dead, has been released

2021-05-25
Protests in Abuja against kidnappings; the Bishops: "Citizens are losing faith in the State"

2021-05-24
Catholic lawyers call for "a summit to address insecurity in the country"; no news of the kidnapped priest"

Abuja (Agenzia Fides) - "Ending the SARS will not solve the enormous problems of Nigeria, because it is futile treating symptoms of a disease when the root cause is known", the Bishops in Nigeria say in their statement on the violent demonstrations that still shake the Country after the announced disbandment of the Special Anti-Robbery Squad (SARS), a special police unit that had to fight against violent robberies, but which instead was responsible for criminal actions against the same population (see Fides, 13/10/ 2020).
According to the Bishops, the crimes committed by members of SARS are evidence of a much more serious problem: "The audacity and impunity with which the SARS officials have been operating all the while is a manifestation of the failing State of Nigeria" .
On 13 October, the police chief in Nigeria announced the formation of a new police unit, Special Weapons and Tactics (SWAT), to take on the tasks previously entrusted to the disbanded SARS unit. " It is not enough to rename the disbanded Special Anti-Robbery Squad (SARS) to SWAT", says Fr. Uchechukwu Obodoechina, Director of the Social Affairs Department of the Bishops' Conference of Nigeria. " The Nigerian Youth along with the rest of the Nigerian citizens are living witnesses to situations of poverty, and disease, exacerbated ‘by infrastructural decay, ruined healthcare systems, endemic insecurity and a tenuous social life", the priest emphasizes. "The living standard of most average Nigerian families is nothing to write home about", continues Fr. Obodoechina, who recalls how unbearable conditions such as "hunger and poverty, the banditry and insecurity, the unemployment and the systemic corruption in the rank and file of Government, the abuse of human rights and the profligacy of the political class among others are evidently unbearable".
The protests against SARS have thus given rise to a generalized protest for the degradation of the living conditions of the majority of Nigerians and in particular of young people. "The Nigerian Youth, with grim determination woke up from its sleep to demand not only for the disbandment of the notorious security formation but also for an immediate social transformation programme capable of ensuring a good life for all Nigerians", underlines Fr. Obodoechina.
"Young people who protest deserve to be heard and taken very seriously", says the priest, warning the government not to forcibly repress the demonstrations, suggesting instead the path of dialogue through the immediate establishment of a committee of "senior statesmen, opinion leaders, civil society groups" to meet with protest leaders to find a way out of the crisis. (L.M.) (Agenzia Fides 21/10/2020)

AFRICA/KENYA - The alleged murderer of Fr. Michael Maingi Kyengo, killed in 2019, has been arrested