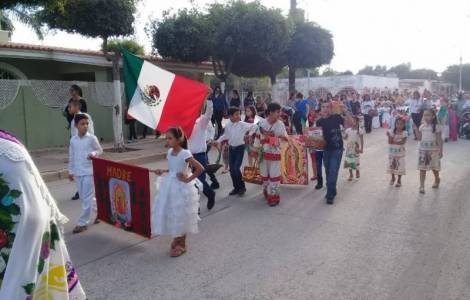 Mexico City (Agenzia Fides) - There will be no liturgical celebration in the Shrine of Our Lady of Guadalupe on 11 and 12 December of this year, and not even the traditional artistic events in front of the Basilica. This was communicated in a letter addressed to the Archbishop of Mexico, Cardinal Carlos Aguiar Retes, Rector of the Basilica of Guadalupe, Salvador Martinez.
Every year, from 9 to 12 December, on the occasion of the feast of Our Lady of Guadalupe, about ten million people come to Tepeyac hill to give thanks or ask for favors to the Blessed Virgin Mary, venerated as Patroness of the Americas in the Shrine of Guadalupe.
According to data released by the Basilica of Guadalupe and the government of the capital, on 12 December 2019, an influx of about 10 million pilgrims from all over the world was calculated. Still according to the same source, the shrine is the place of Marian pilgrimage that gathers most people every year, about 20 million in a few days.
This year 2020, in order to prevent the spread of the coronavirus, those in charge of the Shrine, in agreement with Cardinal Aguiar Retes and the Mexican Episcopal Conference, invite to celebrate the feast in each of the parish communities, in the districts, in the Catholic communities or with family.
On Easter Sunday, April 12, 2020, at the Shrine of Guadalupe, "Empress of America", "the Act of consecration to the Blessed Virgin Mary took place, under the title of Our Lady of Guadalupe, in the face of the spread of Covid-19 which has paralyzed the world". The Mass, presided over by Cardinal Carlos Aguiar Retes, primate of Mexico, was broadcast by the media: radio, television and digital platforms. In addition to the countries of Latin America and the Caribbean, the local Churches of the United States, Canada and the Philippines were also united in the act of consecration. The broadcast on Facebook had reached almost forty thousand people simultaneously (see Fides, 13/4/2020).
Faced with the pandemic which is still spreading, the Rector of the Basilica insisted on the importance of the collaboration with the dioceses bordering the Basilica, from where pilgrimages depart, asking to promote local celebrations to avoid the spread of the virus. Virtual participation on social media will also be promoted as has been the case so far. (CE) (Agenzia Fides, 21/10/2020)

ASIA/INDONESIA - Priority is to save lives: Lent and Easter Masses to take place online in Flores