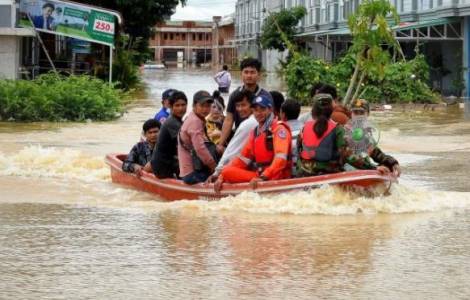 Phnom Penh (Agenzia Fides) - Catholic communities in Cambodia and humanitarian organizations have stepped up their efforts to help those affected by heavy rains and floods across the country. With the help of the Apostolic Prefecture of Battambang and Caritas Cambodia, the Catholic parish church of San Francesco Xavier in Sisopho distributed food aid to the affected families and flood victims. In addition, to help those who do not have shelter, the "Jesuit Cambodia Mission" has welcomed some homeless people and families in their new community building, as Jesuit Father Enrique Figaredo Alvar González, Apostolic Prefect of Battambang told Fides. Furthermore, the Catholic faithful, who have mobilized for material help, also "seek spiritual support and pray for all the victims of the flood, not only in Cambodia, but also in other countries of Southeast Asia".
Since last week, several humanitarian organizations in the four hardest hit provinces, in collaboration with the National Disaster Management Committee (NCDM), have launched humanitarian aid for those affected in the provinces of Pursat, Battambang, Banteay Meanchey and Pailin.
As part of these aid programs, "Caritas Cambodia, which has been active in the country since 1990, in cooperation with the NCDM, has provided its funds to help evacuate the most vulnerable groups to safe areas by searching for flood victims in remote areas", reported Houn Kosal, coordinator of the Caritas project in Battambang. The aids and equipment provided include 20 lifeboats, 115 life jackets, 500 blue tents, 500 mosquito nets and 500 blankets.
The Battambang community thanked Caritas Cambodia for helping the poor with food supplies and other essential goods.
At least 24 people died and tens of thousands had to flee their homes due to heavy rains and flash floods that began on October 17, according to government agencies. Nearly 60,000 homes and 240,000 hectares of agricultural land were flooded, affecting 245,000 people in 19 provinces and cities, including the capital Phnom Penh, and nearly 8,000 families had to be evacuated.
Meanwhile, Prime Minister Hun Sen visited displaced people in a refugee camp set up in Phnom Penh on 19 October and distributed blankets and food. According to forecasts, heavy rains will continue for a few days in most parts of the country and also in other Southeast Asian countries such as Vietnam and the Philippines. (SD-PA) (Agenzia Fides, 21/10/2020)