AFRICA/MALI - "Sister Cecilia is alive, but in need of care. Everything must be done to free her", says former French hostage who spent her captivity with her 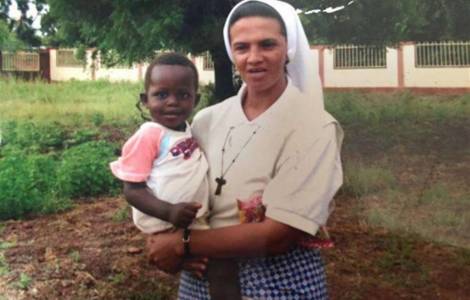 Bamako (Agenzia Fides) - Sister Gloria Cecilia Narváez, Colombian missionary kidnapped in Mali on February 7, 2017, is alive but needs care. This is what was reported by Sophie Petronin, released in the company of other hostages, including Father Pierluigi Maccalli, on October 8.
Mrs Petronin Petronin launched, on her return to France, an appeal to the President of the Republic, Emmanuel Macron, to intervene to facilitate the release of Sister Cecilia. "Her spirit is giving way, she told President Macron- We must do everything to get her out of there".
The former French hostage said she spent most of her captivity in the company of the Colombian nun. The two women were together until October 5, when Mrs Petronin was then transferred for her release on October 8.
The French humanitarian worker said that, together with Sister Gloria Cecilia, they went through about 30 different camps and shared everything: blankets, food, water. She claims that no kind of violence was used against them, except once, when Sister Gloria Cecilia Narváez got lost during a walk and was then tied up for three days.
His Eminence Cardinal Jean Zerbo, Archbishop of Bamako, asked for the release of all the hostages still in the hands of jihadist groups. "Every time we pray, we ask the Lord for the release of Sister Gloria and all the other hostages. This represents a grave humiliation for Mali. They came to do good and were kidnapped by bandits, as if they were slaves. It is a sin for our country".
Sister Gloria Cecilia Narváez of the Congregation of the Franciscan Sisters of Mary Immaculate was kidnapped in Karangasso in southern Mali on 7 February 2017 by jihadists linked to Al Qaida in the Sahel (see Fides, 8/2/2017).
In the meantime, violence is on the rise. In fact 25 people, including 13 soldiers, were killed in several attacks in central Mali. The most serious episode dates back to 6 October when a jihadist group attacked an army base in Sokoura, near the border with Burkina Faso, and ambushed the troops sent as reinforcements. (L.M.) (Agenzia Fides, 15/10/2020)