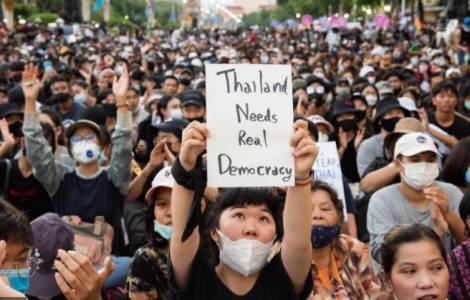 Bangkok (Agenzia Fides) - The renewal of the state of emergency in Bangkok, which bans public meetings of more than 5 people and the publication of "illegal messages" on social media, is the government's response to the massive popular demonstration that yesterday, October 14, crossed the center of the Thai capital. The protest has been going on for months and, for the first time in the recent history of the Siamese kingdom, it also affects the Royal House, which the Constitution grants the right to severely punish any citizen guilty of "lese majesty".
Thousands of demonstrators, who marched yesterday from the democracy Monument to the government building, were dispersed by the police this morning without any episodes of violence. With 2 thousand officers present, the police evicted the area, arresting some protest leaders such as Arnon Numpha, Parit Chiwarak, Prasit Krutharote and Panusaya "Rung" Sithijirawattanakul, the young woman who exposed herself greatly by reading in public the "Manifesto in ten points" of the Movement, which calls for the resignation of Prime Minister Prayut and a revision of the Charter.
The demonstration also intended to protest against the arrest, which took place the night before, of some activists. Since the early hours of yesterday, the area surrounding the democracy Monument, which has now become a symbol of protest, was again filled with thousands of young people with the idea of marching towards the government building to reiterate the demand for a revision of the Constitution, whose debate in Parliament has in fact been postponed. When the procession moved, it encountered a large group of "yellow shirts" loyal to the crown who had staged a counter-demonstration along the route. Indeed, shortly after, the King apparently crossed the area to attend a religious ceremony. The police intervened to avoid clashes between the two groups, but some incidents did occur. The King and his wife crossed the area affected by the procession and the demonstrators reacted peacefully, greeting the royal procession with three raised fingers, a symbol of the protest. The march intended to occupy the area in front of the government building for three days, waiting for the executive to examine the main requests, namely the resignation of Prime Minister Prayut; revision of the Constitution; limitation of the powers of the king. (MG-PA) (Agenzia Fides, 15/10/2020)