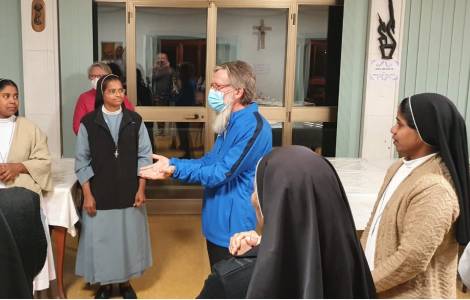 2023-01-04
The memory of Pope Benedict XVI of some African Bishops: "A great theologian of profound humanity"

2022-12-28
'You came to this country with nothing and you will leave with nothing': the story of an exiled family far from home

Madignano (Agenzia Fides) - The desert of the kidnapping "was a time of great silence, of purification, of returning to the origins and the essential. An opportunity to review the film of my life. Every day, especially on Sundays, I said the consecration prayer "This is my body, the bread that was broken for the world and especially for Africa!": this is what Italian missionary Father Pierluigi Maccalli tells Agenzia Fides in the first interview released after the experience of the kidnapping. Maccalli, 59, missionary of the Society of African Missions (SMA), originally from Madignano, in the province of Crema (Italy), was kidnapped in Niger on the border with Burkina Faso, in the night between 17 and 18 September 2018, by jihadist militiamen, and released on 8 October and iarrived in Italy. He is currently in his native country. "His release - note his confreres - was one of the most vivid signs that the Lord sent in this time of suffering and in this Missionary Month". Reached by Fides, Father Maccalli answered some questions.

- How did you experience this time in captivity and what does that mean for your life as a missionary?

Resilience for the sake of life! This motto accompanied and encouraged me day after day and gave me the strength to carry on. They took me with them in pajamas and slippers; I had nothing and was viewed as nothing by these jihadist Muslim zealots who considered me an impure "kafir" condemned to hell. My only support was the simple morning and evening prayers, that I had learned in my family from my mother and the rosary that my grandmother had taught me as a contemplative prayer. The desert was a time of great silence, of purification, of a return to the origins and the essential. An opportunity to review the film of my life which has now reached the second half of my life. I asked myself many questions and cried out to God with all my heart and in a sign of lamentation: where are you? why did you let me down? Until when, Lord? I knew and I know that He was and is there! But I know that God can be seen from behind, now that I am free, back home, I am beginning to understand. I learned how many people prayed and asked for my release during marches and vigils ... that surprised and amazed me. I don't know yet what this whole story will mean for my life as a missionary. I need time

- Did your relationship with Jesus deepen despite not having the Eucharist, the comfort of the Word and of your confreres?

Every day, and especially every Sunday, I said the consecration prayer "this is my body, the bread that was broken for you and especially for the world and Africa!" In the morning prayer I prayed a French hymn "un jour nouveau commence, un jour reçu de toi ... nous le remettons davance entre tes mains tel qu'il sera ... and I ended by adding: I have no other offer than the offer of my life". I asked for a Bible, but they didn't give it to me. Every Sunday I meditated on a Gospel passage, especially during the special times of the church year, like Advent and Christmas or Lent and Easter. But since May 20, the day they brought us a shortwave radio that I had repeatedly asked to hear at least the world news from the world (RFIBBC), I was able to listen to the commentary on the Sunday Gospel from Vatican Radio every Saturday. . Once even live mass ... it was the Mass of Pentecost 2020. That morning, after listening to the news of RFI. I changed the frequency and to my great surprise I heard Pope Francis in Italian, I better listened and tuned the station better and suddenly at the beginning of the Pentecost Mass I found myself in communion with the Pope and the Church around the world. I said to myself: "today I am in St Peter's Basilica in Rome and at the same time on a mission in Africa. I listen with some emotion to the readings and the Gospel that remind me of the motto of my priestly ordination, from the Gospel of John (Jn 20): "As the Father sent me, I too send you. Receive the Holy Spirit". Coincidences? Pope Francis' homily is a breath of fresh air. After 2 years of spiritual drought and the absence of the Word of God, I feel reborn and I welcome this gift as a breath of the Holy Spirit who wanted to push the radio waves up to this Sahara. I enjoyed the Gospel and the Pope's words like never before, they had a special flavor and taste in that context.

- How much has the relationship with death changed and How do you relate to the “ad gentes” mission today?

In the first video they made me do on October 28, 2018, they said that the Italian government wanted proof that I was alive, they told me to freely address the government, the Pope and family. I started with the family and told them to "be strong, pray for me, I'm ready for anything", and to Pope Francis: "remember to pray for me". Only once I received a threat or rather a promise from a mujahedin he would kill me. He was upset and irritated by another episode that I will not tell you. In his eyes I was a filthy 'kafir' and moreover a preacher of a heretical faith and condemned by the Koran, and discredited the Holy Book. That day I saw the sword of Damocles hanging threateningly over my head. But the more days and months passed, the less I feared a tragic end. We were precious goods for them and for this reason they always treated us well.
I always felt a missionary even when my feet were chained, I would say 'missionary from the bottom of my heart', as our Founder (Mgr. Melchior de Marion Bresillac, founder of S.M.A.) used to say. I often walked down the slopes of Bomoanga-Niger (the mission where I was kidnapped). My body was a prisoner of the sand dunes, but my spirit went to the villages that I mentioned in my prayer and I also repeated the names of my collaborators and of many people and young people that I carry in my heart, especially the malnourished and sick children that I cared for, and many many faces that are a living presence in my wounded heart. I realized that mission is not just 'doing', but it is also being silent and basically it is Missio Dei, it is the work of the Lord. The much activism that characterized my days now was nothing more than memory and prayer. But the mission continues and is always in good hands, the hands of God, the Missio Dei. The testimonies of people, friends and strangers who participated in prayer vigils, marches ecc… to implore my release, which I am hearing about these days, confirm to me how powerful the Missio Dei is. Everyone tells me they prayed a lot, even someone said "you filled the churches"…but it was not me, this is God's work!

- What was your relationship with the kidnappers and what are your feelings towards them today?

They always respected me in general. My long white beard must have impressed the beardless young men who guarded me, they called me "shebani" (old man) in Arabic or Tamaceq. I am still very sad about the fate of these young people indoctrinated by propaganda videos that they watched all day. They don't know what they are doing! I hold no grudges towards my captors and prison guards, I prayed for them and continue to do so. I also said to the person who guarded me during my last year of imprisonment while I was driving to the release date last Thursday, October 8th, "Que dieu nous donne de comprendre un jour que nous sommes tous frères".

- What are your hopes and plans for the future?

These two years have taught me to live in the present. I wanted it to end soon, every sunset I would say "hopefully tomorrow". Then when the sun rose I took my rosary and structured my day with the usual daily gestures, day after day. The future belongs to God, now I am enjoying my return home, this is my present. In the near future I want to meet my confreres in Genoa and Padua that I have not yet physically embraced and then the cloistered monasteries that tirelessly prayed for me, and to visit the many friends in Italy and beyond. The future will be the way God wants it. (GM/AP) (Agenzia Fides, 15/10/2020)