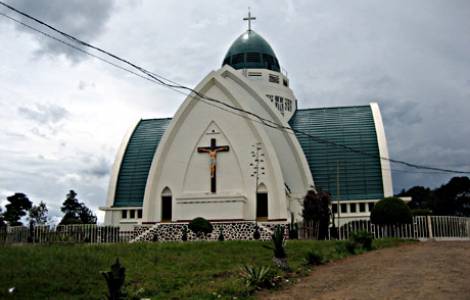 2020-11-23
Resignation of bishop of Kisantu, Democratic Republic of the Congo

2020-11-19
Appointment of bishop of Kindu, Democratic Republic of the Congo

2020-11-11
The Bishops: "The well-being of the population must have priority in politics"

Bukavu (Agenzia Fides) - Ten years have passed since the publication of the Mapping Report, recalls the Archbishop of Bukavu, Mgr. François-Xavier Maroy Rusengo, but also "20 years since the death of Mgr. Emmanuel Kataliko in circumstances that have not yet been clarified and above all 24 years have passed since the assassination of Archbishop Christophe Munzihirwa (see Fides, 18/11/2006). People want to know the truth, not to seek revenge or cultivate hatred, but to better honor their dead.
We encourage all human rights activities that give an objective look at the events that have occurred in this part of the Democratic Republic of Congo, from the past to the present day. Remembering our dead, asking for justice and reparation is the best way to promote sincere reconciliation so that these murders, both mass and individual, never take place again".
Unfortunately, however, the violence in the country does not seem to end, which, according to a study by the Canadian NGO Impact, is due to the presence of a 2,700 gold mines. These mines produce 15 to 20 tons per year, of which about a third are supposed to reach Rwanda via Bukavu. In 2018, Rwanda allegedly produced 2,000 kg of gold, while the United Arab Emirates alone said they had received 12,000 kg of gold from Rwanda.
A second element of the connection with Rwanda are the so-called Banyamulenge of Rwandan origin, who have lived in South Kivu for years and whom the Congolese government would like to allow to administer the areas they colonize. Like in Minembwe, an area in South Kivu that has become a local government. This decision made in Kinshasa was seen locally as an imposition and, above all, an expropriation of the land.
The Bishop of Uvira Sébastien-Joseph Muyengo, expressed his regret regarding the decision to establish the Municipality of Minembwe. "We regret that this act, which is far from promoting real peace in the highlands, is, on the contrary, causing a great deal of hostility throughout the diocese, in the region and also in the country, mainly due to the special treatment that Minembwe has compared to others […]. Yesterday the question was that of nationality, today it is the land. We can give citizenship to those who want and deserve it, but under no circumstances can land be redistributed. For the people, it is not a rural community, but they consider it occupied areas. We fear that the Minembwe case will encourage the so-called Balkanization of Congo".
The President of the Republic, Félix Tshisekedi, during a press conference held on October 8 in Goma (North Kivu) declared to "cancel what has been done so far for Minembwe".
For Jason Stearn, researcher and founder of the Congo Research Group at New York University, it would have been appropriate to initiate a dialogue between the participating communities before establishing the new local government.
"The Minembwe issue is a legal issue, but also a broader cultural and political issue. I think there was some political uncertainty. It's worth talking about living together in South Kivu, it's worth talking about the Banyamulenge's rights to access self-government. But we cannot do it by simply imposing it on Kinshasa. It was clear that the creation of the Minembwe local government would have created a very strong controversy". (F.F.) (Agenzia Fides, 13/10/2020)