ASIA/INDONESIA - Challenge of the law that reorganizes the labor market, inappropriate according to an Indonesian Jesuit 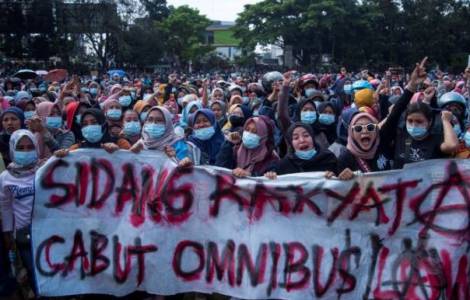 2020-11-17
Associations write to the UN: investigation into the murder of a Catholic catechist by the military

2020-11-12
New missionary Bishop in Papua, Apostle of peace in a troubled region

Jakarta (Agenzia Fides) - "The problem with the Omnibus Law lies above all in the fact that the decision to vote it took place at an inappropriate moment, without a thorough public debate and without a strong involvement of civil society". It is with these words that Father Ignatius Ismartono SJ, Director of Sahabat Insan, an Indonesian Jesuit organization that deals with immigrant workers and victims of human trafficking, comments the demonstrations to Agenzia Fides, which for some days, have been crossing the Indonesian archipelago. Thousands of demonstrators took to the streets to challenge, in some cases even violently, the so-called “Omnibus law”, an important law, passed in a hurry last Monday, which intends to reform the labor market, bureaucracy and rules in matters of foreign investments. The measure had long been targeted by critics and especially by trade unions and the anticipation of the parliamentary vote made the situation even more tense. The speed with which the text was approved, which was neither the subject of a public debate nor an in-depth parliamentary debate, provoked widespread protest. "An omnibus law, that is, intended for everyone - continues Father Ismartono - can work well only if its content is understood not only by politicians but by the population. This is very complicated in these times of emergency, characterized by Covid-19. These general laws only work if there is a good understanding and a basic agreement of the workers, a correct application of democratic rules and if workers do not feel threatened. The demonstrations in recent days have shown that this was neither the time nor the right way "to adopt such a text.
Approved in Parliament thanks to the votes of seven of the nine parties present, the Omnibus law is contested above all on two of its aspects: the decline in the rights and achievements of workers and an excessive elasticity in terms of standards on the protection of labor for investors.
For President Joko Widodo, this is a law that reorganizes and simplifies state bureaucracy and will also attract investment by creating millions of jobs. However, after the text was approved, the trade unions implemented their threat, announcing a three-day strike despite Covid-19 (Indonesia has more than 300,000 cases and 11,000 deaths) which have often degenerated into clashes with the police resulting in a tragic death toll in terms of injuries, cars set on fire and hundreds of arrests.
The "Omnibus Law" modifies 79 legislative provisions in the field of labor and aims to increase the efficiency of the State administrations and the productive capacity of the country. It also wants to encourage foreign companies looking for new markets which, thanks to this law, will also be able to have greater work shares from non-Indonesians. The project simplifies bureaucratic procedures but seems to favor investors more than workers. In addition, many restrictive environmental regulations are relaxed: companies are obliged to submit an environmental impact analysis only if the project is considered “high risk”. The unions strongly criticized the abolition of the sectoral minimum wage in favor of minimum wages set by regional governors, as well as the reduction in severance pay, even though the creation of a State support fund for those who lose their jobs is envisaged. The number of authorized overtime hours increases while the number of free days during the week is reduced from two to one. The Confederation of All Indonesian Workers Unions - which has nearly 5 million union members - intends to take the case to the Constitutional Court in the hope that the executive will backtrack and reopen the process of ratifying the law with amendments that improve the structure. (MG-PA) (Agenzia Fides, 10/10/2020)

AMERICA/URUGUAY - Time of hope, time of concern, but "it's always time of God"