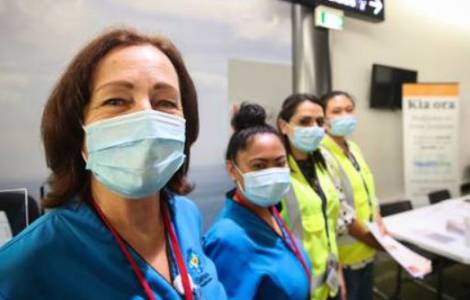 Dili (Agenzia Fides) - The small Asian state of East Timor is the country in the world that can boast an almost incredible toll (28 cases of coronavirus, and no deaths), "and the secret to containing the virus was the ability to act quickly and with a collaborative spirit, full of harmony and unity, in the various sectors of society: a commitment to which the local Catholic Church contributed with all its energies and abilities". This is what Filipino Jesuit Fr. Erik John J. Gerilla, who works as a missionary in East Timor emphasized, where he was sent immediately after he was ordained a priest, and where he was later appointed Executive Director of the Jesuit Social Service in the small and young Eastern State (independent since 1999), where out of 1.3 million inhabitants, 95% are Catholics.
"I have to say", Father Erik told Fides, "that the efforts of the Catholic Church here were in line with the rules of the civil authorities of Timor. There is absolute harmony between the institutions and civil society. Indeed, the first phase was marked by the crisis and lockdown, which had also prevented the public celebration of the Eucharist. But we provided online masses and spiritual material for prayer as well as reflections from various Church-related groups and movements. As soon as the state of emergency was lifted, the Bishops' Conference reopened the doors of the churches to public masses, maintaining some restrictions on physical distance and a new way of dealing with the community. Last but not least, various church groups also offered online retreats and spiritual support. I would therefore like to say that the Church's contribution was considerable, especially on a spiritual level, which is a very important and positive element".
But also on the side of charitable initiatives, many activities were initiated, to a large extent, by Catholic parishes: "Many congregations of nuns", according to the missionary - have sewn face masks and distributed them to poor parishes. Some religious orders have organized relief efforts related to the distribution of food and household supplies. The Jesuits helped families in rural areas. Over a thousand families were provided with rice, food parcels and household goods". It should also be mentioned in this context, adds the religious, that "we have received generous donations from our confreres in Australia through the Jesuit Mission Office in Sydney".
"We do a lot, but what we do is never enough", the Jesuit continued, "and above all we must be careful: for example, the government has taken a drastic step by giving all families a financial subsidy of one hundred dollars each month. However, this has proven to be detrimental to the economy, as raw material prices have risen due to the high level of money in circulation".
Catholic volunteers from various parishes have tried to give an answer in the health sector as well: "much prevention work in local communities took place mainly through education and dissemination of information".
"To this day", concludes Father Gerilla, "there is practically no local spread of Covid-19 in the country: this is a great miracle that East Timor enjoys. This is due to the government's rapid efforts to organize an efficient crisis management task force and take bold steps, such as closing its borders on time. All cases of infection are currently monitored and treated in designated medical quarantine facilities. And so far we have managed to curb the virus, thanks to God and thanks to the commitment of the government and the people who are united in this common struggle in which, as the Pope recalls, no one will save themselves alone". (MG-PA) (Agenzia Fides, 8/10/2020)