ASIA/HOLY LAND - The Latin Patriarchate of Jerusalem thanks the Order of the Holy Sepulcher for its support. Debts for the University of Madaba have been fully repaid 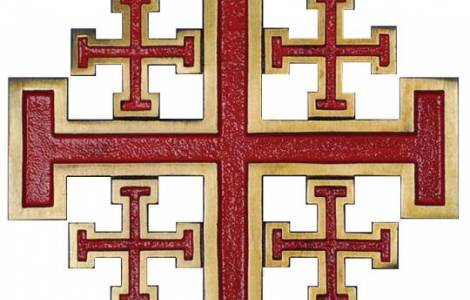 2020-10-29
Bethlehem: Christians and Muslims together against Mohammed cartoons

2020-10-07
The Latin Patriarchate of Jerusalem thanks the Order of the Holy Sepulcher for its support. Debts for the University of Madaba have been fully repaid

2020-10-03
Heads of the Churches in Jerusalem: the UN and world leaders must stand up for an end to the conflict in Nagorno-Karabakh

Jerusalem (Agenzia Fides) - With heartfelt thanks for "the concrete and tangible sign of divine providence" for the Latin Patriarchate of Jerusalem, the Apostolic Administrator, Archbishop Pierbattista Pizzaballa, addresses the Order of the Knights and Dames of the Holy Sepulcher of the Patriarchate in a message in which he confirms, among other things, that the debt related to the construction of the American University of Madaba, which had weighed heavily on the Patriarchate's coffers, have been fully repaid, reducing the overall debts that burdened the Patriarchate administration by almost 60 per cent.
"In these four years of service to the Latin Diocese of Jerusalem, in the Latin Patriarchate, Archbishop Pizzaballa underlines in his message, I have been able to personally ascertain the role of the Knights and Dames of the Holy Sepulcher for this Church, not only in the context of educational and pastoral activities, but in general for the life of the diocese as a whole". He recalls that four years ago, "at a particularly difficult moment for the Patriarchate, the Knights and Dames, showed their solidarity and closeness by encouraging and also concretely supporting the processes of revision and control of the administrative life of the diocese, which had become urgent and necessary".
A particular closeness was also experienced in view of the crisis caused by the COVID-19 pandemic: "Due to the measures decided by the various governments to tackle the pandemic, remembers the Apostolic Administrator of the Latin Patriarchate of Jerusalem, a large part of our population found itself facing a drastic cut in wages, and a general economic situation even more fragile than usual. Thanks to the support of the Grand Master (currently Cardinal Fernando Filoni, editor's note), our appeal to the Knights and Dames had a response that went far beyond our expectations and that gave us the necessary breathing space to manage this emergency with greater serenity. We were all amazed and humbled by the immediate response and its scope".
In the Holy Land, the side effects of the lockdown related to the pandemic and the lockdown of economic activities have resulted in job losses, the suspension of pilgrimages and tourism, the closure of schools and a crisis in charitable initiatives, which have penalized the most vulnerable populations. For this reason, Cardinal Fernando Filoni, Grand Master of the Order of the Holy Sepulcher, announced in mid-May (see Fides, 14/5/2020) the establishment of an ad hoc Fund for the collection of donations for the families most in need who live in the Land of Jesus.
The Order of the Holy Sepulcher supports the normal functioning of 38 schools in Palestine, Israel and Jordan, which employ 1,300 teachers and staff at the service of 15,000 Christian and Muslim students. From the 30,000 members of the Order of knights on all five continents, and from the lieutenancies scattered across the five continents - the Cardinal Grand Master reported - "a generous response" to the request to support the special Covid emergency fund for the Holy Land: from May to September, additional donations of about three million euros was collected. The additional help of the Order of Knights made it possible to guarantee support to more than 2,400 families in over 30 communities. (GV) (Agenzia Fides, 7/10/2020)