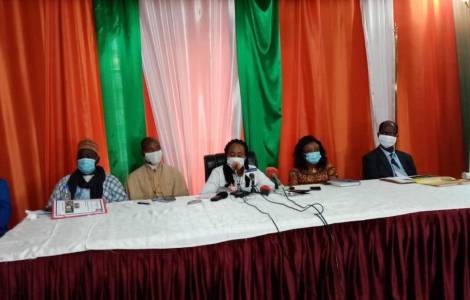 2020-11-28
The National Director of the PMS: "The nation needs peace, solidarity and fraternity"

Abidjan (Agenzia Fides) - The platform of faithful politicians are campaigning for peace, reconciliation, social cohesion and development (PLCRD), a few days before the presidential elections at the end of October and in light of the tensions that have arisen in recent times, and wants to contribute to the easing of tensions in the Country and pacify the socio-political climate before, during and after the elections.
PLCRD President Madeleine Yao presented a series of planned activities on September 30th.
These include: "the organization of training seminars for traditional leaders on the values of peace and social cohesion in Ivory Coast; the publication of a collection of quotes from the Koran, the Bible or other scriptures referring to peace; raising awareness among media professionals in favor of Peace before, during and after the electoral process; the involvement of executives in the development of a code of ethics; the dissemination of the code of ethics for peaceful elections drawn up by the PLCRD; the organization of campaigns to educate people about the values of peace in Ivory Coast ... "
The President presented the platform and its goals, which "all stand for the promotion of peace and social development", and recalled actions already carried out in the Country in favor of social cohesion. In doing so, the President noted that the mission of this platform is to "create an effective tool for reconciliation, conflict prevention and management and a tool to promote development among all of its actors".
According to Ms. Yao, in light of past experiences of the 2011 crisis and its consequences as well as the current socio-political climate, "it is time that every Ivorian, regardless of his or her political background, social situation or economic position, helps create the conditions to create a lasting peace in Ivory Coast in the interests of all".
The PLCRD is an interfaith network of devout leaders (Catholic Christians, Evangelicals, Methodists, Protestants, Muslims, etc.) who work for peace, and create a climate of trust by promoting peace, social cohesion and community development. The platform was officially launched on October 18, 2018 by the Catholic community of the Mother of Divine Love through its "Africa For God" program.
Since its creation in 2018, the PLCRD has carried out various actions, including "Days for Peace", prayers for peace in churches, mosques and other temples, caravan of peace, etc..". (S.S.) (Agenzia Fides, 3/10/2020)

ASIA/INDONESIA - New missionary Bishop in Papua, Apostle of peace in a troubled region